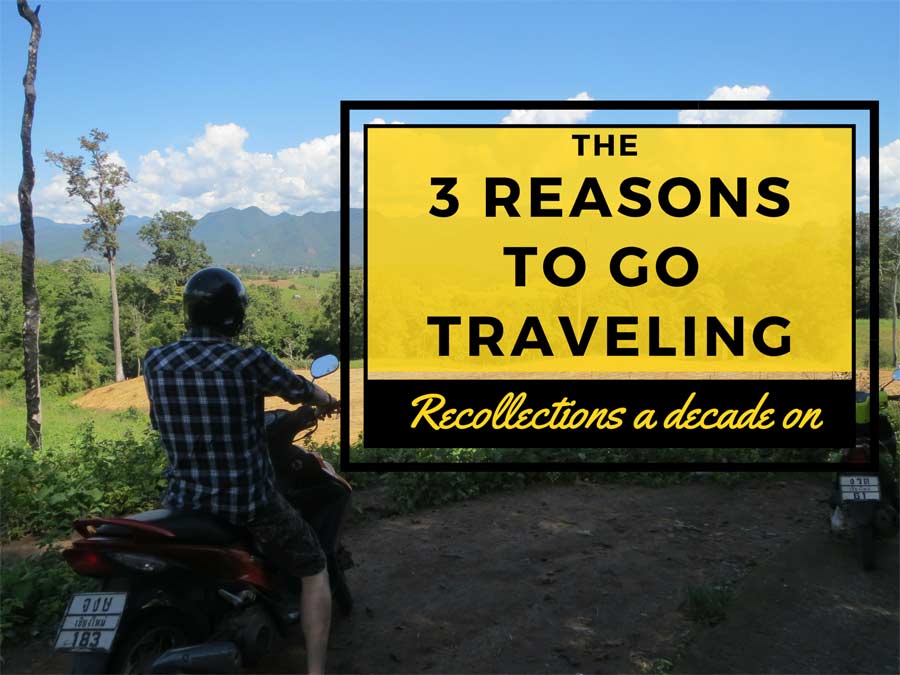 Recollections a decade on

It was a decade ago this year I discovered the joy of traveling. I went from being a inexperienced guy who had barely been out of England to a wisened world traveler.

The funny thing is I can still remember the days leading up to me flying out of England in September 2009 better than most days of my life.

I can remember my last week at work. Is there anything better than that last week at work – when you are free of all your roles and responsibilities, when no one can give you anything to do as you won’t be there in seven days time?

Add to that the fact that I knew I probably wasn’t going to work for at least a year or so and I couldn’t have been much happier.

I remember my various leaving dos with friends, family and work colleagues.

I remember my last day at work being on a Friday and then the following Monday I remember going into town and getting some last minute things. I remember having a haircut and telling the barber I was leaving to go traveling the next day (yikes).

I remember packing and repacking my bag numerous times on Monday afternoon/evening, until I eventually could just about cram everything in (I would soon find a lot of stuff I really didn’t need).

I remember going out for dinner that evening with my dad and wondering when I would next be back in the UK having dinner with him and where I would have been and what I would have done.

I remember Tuesday morning, the day of my flight, being incredibly nervous and it all feeling slightly surreal as my dad drove me to the airport.

I remember having a sausage sandwich in a Wetherspoons at the airport with my dad and his partner Sanchia and it all being a bit quiet as the enormity of what was happening hit us all.

I remember walking to security in silence with my dad and Sanchia as we both knew we were about to say goodbye.

I remember hugging him tightly and saying goodbye and watching him walk off down the corridor occasionally turning around to wave, until he eventually turned and looked back one last time and waved and then walked around the corner out of sight.

I remember every single one of those moments so distinctly

A short while later I was onboard a plane to Singapore where I then got on a connecting plane to Bangkok, where I met my friends Ben and Mary and began what was the best time of my life.

When I think about my first ever big trip and the almost two years of traveling I did, there are so many aspects of it I could write about that I loved.

But in the end it all boils down to three things that made traveling so special:

I made stronger connections in my two years traveling that I probably had done in the rest of my life back at home.

When you go traveling you meet so many people with the same mindset as you it is impossible not to make these connections.

More often than not you are coming into contact with other people who have quit their job, because they realise their is more to life than the 9 to 5 grind, other people who place a stronger emphasis on experiences that on material possessions.

And the beauty is:

Unlike at home, conversations aren’t about work, or family, or football, they are about where you have been, where you are going, where you live, how long you are traveling for.

The great thing is you do see the same faces again and again as inevitably a lot of you are following the same route.

In two years of traveling I only probably spent a week or two truly on my own. Aside from that it was an endless sea of companionship. Often I would find myself traveling with someone I randomly met for a couple of weeks and then parting company as we went our separate ways. I’d be left feeling slightly sad and feeling that I would never meet someone else that I got on with as well, only to meet someone who I got on with even better the next day on a bus/in a hostel/on a trip!

Someone I met on my first day traveling in Bangkok I ended up living with in Australia. Slowly, bit by bit, Ben, Mary and I met people as we traveled down the coast of Vietnam until there were about 12 of us all together when we got to Mui Ne.

I spent almost three weeks traveling in Fiji with two sisters i had randomly met a month previously in Nelson in New Zealand. When I came back to Thailand I met two awesome Canadian girls who were on the bunk beds next to me and I not only traveled with them I also made friends for life.

There are so many good things about traveling, but if I had to pick one it would be the friendships I made, no matter how fleeting.

And the way I see it?

Without them, no matter how many beautiful places I saw, or incredible things I did the memories would not be the same.

“Each friend represents a world in us, a world possibly not born until they arrive, and it is only by this meeting that a new world is born.”

There are very few better feelings then waking up in the morning and being able to do whatever you want, whenever you want. Not being constrained by appointments or a job or meetings.

That is the beauty of traveling.

So many of us live our lives to regimented timescales. We all feel miserable on a Monday morning when we head to work, just waiting for the weekend to come round again. Or we countdown the days until our one week, or if we are lucky, two weeks, off of work before getting back into the grind again for another few months.

And you know what?

When you are traveling you have none of that. You begin to forget not even what day it is but what month it is. You created your own timescales, the most stressful thing is making sure you get to that local bar for happy hour.

“The very basic core of a man’s living spirit is his passion for adventure. The joy of life comes from our encounters with new experiences, and hence there is no greater joy than to have an endlessly changing horizon, for each day to have a new and different sun.”


Chris McCandless, Into The Wild

I think that quote sums it up better than I can.

There is an indescribable thrill when you are approaching a new place for the first time. Waiting for it to reveal itself to you, unsure whether it will be a place you love or a place you hate, a place that changes your life or a place that just melts away into the list of places you have visited.

It all boils down to this:

When you travel, each day is totally yours – do what you want, fill it with as much or as little as you want, you don’t have to feel guilty about anything or pressured to do anything.

I have had so many amazing experiences traveling. Exploring the craziness of the Khao San Road, tubing in Laos, being stunned at the horror of the Tuol Sleng Genocide Museum in Cambodia, driving the Great Ocean Road in Australia, whitewater rafting the highest commercial waterfall in the world in New Zealand, seeing the most amazing sunsets I have ever seen in Fiji…

And they are just a few of the things I experienced…

I passed up loads of other opportunities – like skydiving or bungee jumping as, quite frankly, I was too scared.

Those experiences will be forever imprinted on my mind, from now until the day I die.

In all reality life is just a series of moments stitched together – and if you can make those moments as memorable as possible your life will be immensely more enjoyable.

That is why traveling is so great.

I remember just arriving in Sydney and a girl I had met in Vietnam had just arrived there and we were staying at opposite ends of the city.

We agreed to meet, but as neither of us really knew Sydney we couldn’t decide where to meet. So we just decided to meet at 7.30pm outside Sydney Opera House.

We just arranged it like that. In much the same way, when I was at home, I might organise to meet a friend outside the Railway Station, or in Wetherspoons, we had casually arranged to meet outside one of the most famous landmarks in the world.

Those experiences were made all the more special because of the people I spent them with, if I’d spent two years traveling the world without meeting anyone it would not have anywhere near as amazing as it was.

If I’d been on a strict timescale and knew I only had a certain amount of time in each place, I would probably have missed out on some fantastic things and not met as many people.

If I hadn’t driven the Great Ocean Road or seen the most incredible sunsets I would have lost some important reference points that made traveling extra special.

These three things go hand in hand, not just when you are traveling, but in life in general. If you have all of them you should be happy, no matter where you are.