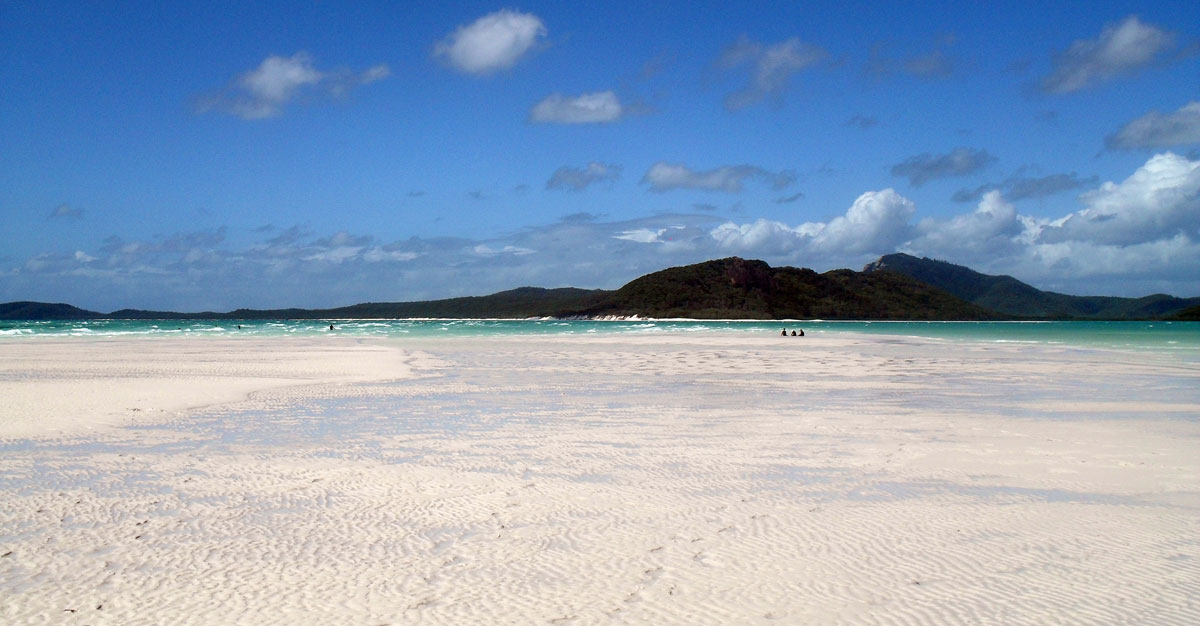 Over the past ten days I’ve been lucky enough to have been on two amazing trips that are on most backpackers’ to do lists when they come to Australia – first Fraser Island and now the Whitsundays. As with my trip to Fraser the Whitsundays had its ups and downs, but is definitely something I will look back on fondly for the rest of my life.

Rockhampton – For One Night Only

It happened to be Libby’s birthday so we went our for dinner to the Criterion Hotel in Rockhampton. We got chatting to some random Australian guys there and they convinced us to have a go on the hotel bingo, which we did, and we won $60!

We then had two nights in Airlie Beach before going to the Whitsunday Islands. Airlie is the main departure point for these trips and as such has quite a ‘vibrant’ atmosphere (ie a lot partying goes on!). We continued our winning streak on our first night by winning the hostel quiz.

We had different accommodation booked for the second night as part of the Whitsunday Tour we had booked and it was probably the best place I have stayed in Australia as of yet! Ben, Mary and I were sharing our own little apartment complete with lovely living area, balcony, fridge and TV – almost made us not want to leave the next day for the Whitsundays!

All Aboard The Sailing Boat

The Whitsundays are a collection of 74 islands, nearly all uninhabited and national parks and all with the Great Barrier Reef on their doorstep. They conjur up images of tropical paradise and gorgeous white sandy beaches.

There are numerous boat trips out to the islands that range in time and cost, we hadn’t gone for the cheapest, but had certainly gone for the cheaper end of the scale. There were about 12 or 13 of us on the boat and it was pretty small, but it seemed ok.

Bizarrely one of our fellow tour mates was someone Mary used to teach! And there were also two sisters that Ben and Mary had met camping, so it was nice to know a few people. The first night was amazing as a small group of us sat chatting and drinking on the boat, under the most beautiful star filled night sky, with the temperature still in the mid 20s as we drifted around the sea. It was a moment to take in and appreciate the traveling life.

The Worst Night’s Sleep Ever

Within a few hours though the mood had changed completely! I got the worst night’s sleep ever, as it was so small and compact in the sleeping area and combined with a large group of people sleeping down there it was also very, very hot. I reckon I got at most two hours sleep.

We were up at 6am for breakfast and an image occurred that will be forever etched in my memory. I think Mary felt as tired and hungover as me that morning and I was watching her try to eat her bowl of Rice Crispies. As Mary doesn’t like milk she was trying to eat it dry, but as it was so windy every time she lifted a spoonful from the bowl nearly all of them were blown away, leaving her with about two Rice Crispies each time!

The Beauty Of Whitehaven Beach

The mood got better as the wind died down and the sun came out and we visited the jewel in the crown of the Whitsundays – Whitsunday Island home to Whitehaven Beach.

Whitehaven Beach is a pristine beach with amazing sands that consist of 98% silica that give it a bright white colour, the water is incredibly clean and clear and the scenery is stunning. It really is one of the best beaches in the world and totally made me forget my lack of sleep and hangover!

We spent a lot of time wandering around the beach, which seems to go on forever, and then sunbathing. Before we knew it we were back on the boat where there was an opportunity to go zip-lining rather bizarrely, from the boat to a little dinghy. I passed up on this, just as I did the opportunity to go snorkelling or scuba diving, electing instead to watch the world go by and enjoy the peace and quiet of an empty boat

In the evening we ate and then played drinking games. Before watching another amazing sunset from the boat, which was probably worth cost of the trip by itself.

Back On Dry Land

We headed back to Airlie Beach early this morning and unfortunately the weather was terrible! We got back about 2pm and whilst it had been a fantastic trip I was grateful to be back on dry land and able to have a little more by way of luxuries, such as running water and a decent bed!

The good thing is that later we are driving up to Townsville and staying with the parents of a friend of Ben and Mary’s, so we really will have some home comforts!

6 thoughts on “The Gorgeous Whitsunday Islands”