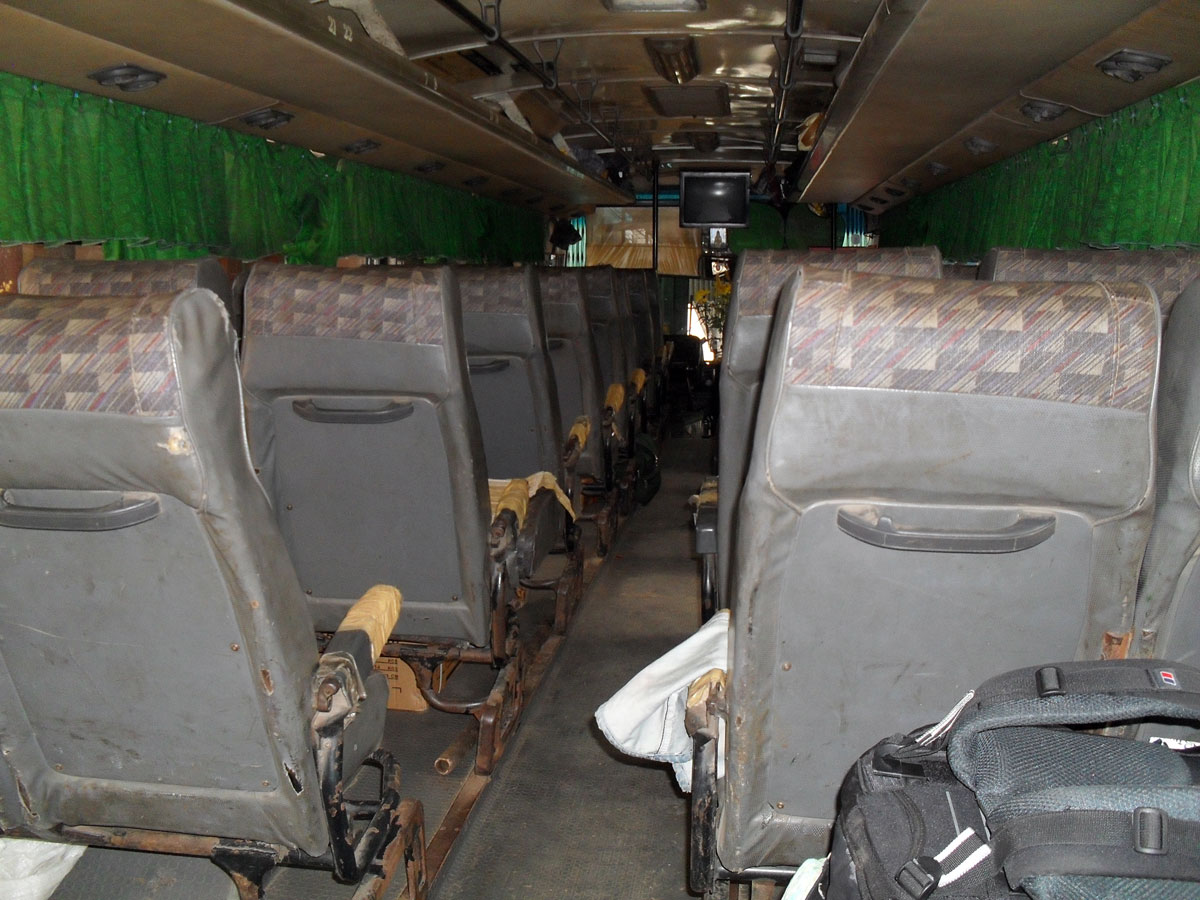 ‘We leave tomorrow on a bus to Vietnam’ – as I innocently wrote those words little did I know the story that would follow my last diary entry, as the last couple of days have been to put it mildly, not very nice!

Everything started off ok, in fact by South East Asian standards things started off quite well when we were picked up on time from our Guesthouse on Monday at 4.45pm to be taken to Vientiane Bus Station to get on our bus to Vietnam. Our tuk-tuk collected a few other backpackers (including one who looked just like Jon Lovitz, which amused Ben and I).

We eventually arrived at Vientiane Bus Station at 6pm, and this is where things started to go downhill. This was a bus station in the very loosest sense of the word, as it was actually a huge field with about 30 (ancient) buses parked around it – the whole place was madness. The tuk-tuk drove into the middle of the field and then we were faced with a sea of Lao people fighting each other to help us get off and carry our bags.

After convincing them that we were capable of carrying our backpacks about 50 metres we were immediately then confronted by a bus driver, who asked to see our ticket. We showed him and he said, “Ah ok, yes you come with me”, we started to walk towards his bus and another driver pulled us aside to look at our ticket and said “No, no, no you come with me”. This happened about five or six times, and seeing as none of the buses had any real indication of where they were going, we were none the wiser as to which one was the one we needed to get.

Eventually after much confusion, deliberation and a process of elimination we picked what we thought was the right bus and prepared for the long journey to Vietnam.

FROM BAD TO WORSE

To say our bus was slightly unsuited to an overnight journey would be like saying Hitler was a bit unpleasant. It was old, dirty, had no air con, no leg room and no toilet.

Nevertheless the bus left Vientiane at 7pm and after a few stops (and not very much sleep for me) we arrived at the Vietnam border crossing about 6am yesterday. We then sat there for about four hours. This was definitely a time I was grateful for the small mercy of being a male and being able to go to the toilet anywhere that was reasonably sheltered from view.

Eventually we emerged at the other side of the border at about 10am. This was not before the sniffer dogs had taken a liking to Mary’s backpack and it was examined by the crossing guards. Thankfully, seeing as Mary is the nicest and most clean living person ever, there was nothing of any note inside.

Back on board our bus we had another couple of hours journey before, at 12noon, we reached Vinh where we changed buses. This was a memorable moment for two reasons:

So just after 12noon, and 17 hours after we left Vientiane, we began the second part of our journey which would take us to Hue. After a couple of hours it became apparent that the weather down the Vietnamese coast was a touch on the bad side. Basically, unbeknown to us, we were driving straight into the eye of Typhoon Ketsana…

The main highway in Vietnam runs parallel with the sea, and the further we got the worse the weather became. The roads were becoming more and more flooded and devastation was evident in every town we drove through.

Eventually by 6pm (23 hours after leaving Vientiane) yesterday evening, we were finally nearing Hue, until another disaster struck. The roads were too flooded for us to continue and we were unceremoniously dumped in the middle of a typhoon ridden street with our backpacks. It was pitch black as the Typhoon had caused a power cut and we had no idea where we actually were. Also nowhere seemed to be open, and the fact we might have to hunker down with our backpacks was becoming a real possibility.

Finally after walking up and down a pitch black street for 30 minutes we managed to convince a hotel that was effectively shut to let us in. It wasn’t the cleanest or nicest, but we will be forever grateful to them for taking pity on us. We had gone pretty much 24 hours without any food, and around 36 hours with no sleep. Tired, hungry, thirsty, smelly and slightly delirious we bedded down for the night.

WHAT A HUE TO GO

Thankfully this morning we woke to blue skies and sunshine. Some of the flooding had subsided and as we had the opportunity to survey the lay of the land in the daylight we were also able to work out we were no more than ten miles from Hue.

We took advantage of this opportunity and got a taxi into Hue. Owing to the fact that Hue had been the worst hit of anywhere in Vietnam (500mm rain yesterday) many roads are still closed, but we have managed to find ourselves a good hotel to stay for a couple of nights and there is a decent bar nearby.

I cannot even describe the feeling of stepping into a clean, comfortable, air con room and having a lovely warm shower after the trials and tribulations of the last two days.

As I write the rain is hammering down again, the sky is black and it looks like more bad weather is on the way. How we will get out of here in the next couple of days is anyone’s guess, but the main thing is we are safe, comfortable and off to get drunk this evening!

4 thoughts on “The bus from hell to Vietnam…”