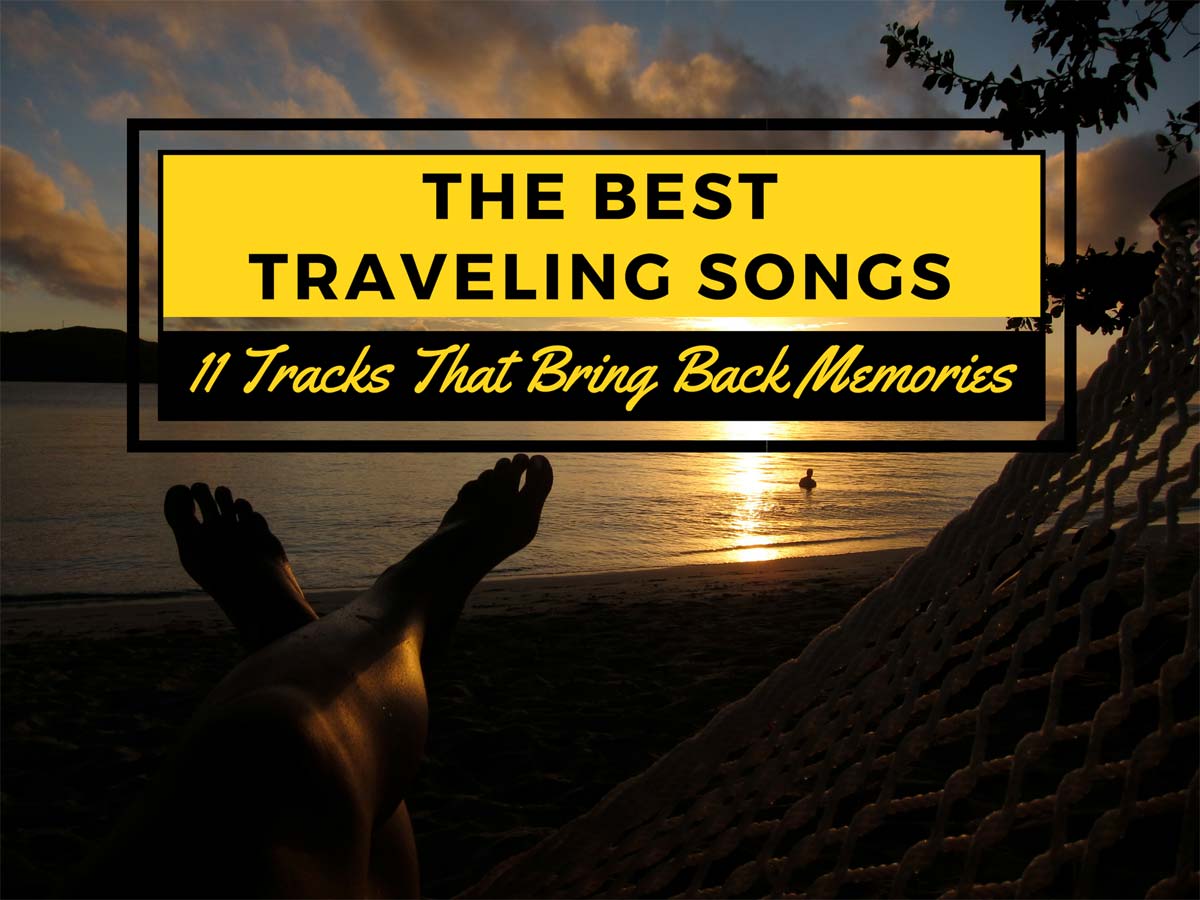 11 tracks that bring back happy memories

It is funny how certain songs can take you back to a particular moment in time – and hearing any of the songs below instantly takes me back to specific moments in my travels.

Now just to point out I love my music, so I am not saying these are my favorite songs, just they are songs that seemed to mark my time when I was traveling.

I Gotta Feeling by The Black Eyed Peas

This song seemed to follow us around South-East Asia like a stray dog we couldn’t get rid of. And as much as I had no interest in it at first it soon became a signature tune for the little traveling group I was in and I soon grew to love it.

We reached Nha Trang in Vietnam and visited The Sailing Club each night and this song would always come on. As soon as it did the opening few bars signalled whoops of delight from us as we threw ourselves around the dance floor.

When I hear it now I am immediately taken back to that packed dance floor in Nha Trang dancing with a group of people who just a few weeks previously I had barely known, having a complete sense of freedom and happiness that only traveling brings.

I’m Yours by Jason Mraz

This song was apparently released in December 2008 – nine months before I left to go traveling, but I somehow seemed to have missed hearing it back in the UK, despite it spending the whole of 2009 (with the exception of the last two weeks of the year) on the chart.

I more than made up for this in South-East Asia though where this song seem to be played in every bar/club/shop anywhere!

Where I Gotta Feeling captured the more energetic travel vibe and big nights out, then I’m Yours was its complete opposite. The relaxed, casual and laid back feel suiting those quiet moments sitting outside sipping a drink watching the world go by.

“There’s no need to complicate” sang Jason Mraz towards the end of the song, and there certainly wasn’t – traveling was possibly the most uncomplicated lifestyle ever!

This song seemed to cover both my time in South-East Asia and in Australia, which figures as apparently it found its biggest success in Australia – reaching its peak position in February 2010 – right in the middle of my road trip across the country.

The folksy and almost aggressive beat really appealed to my musical tastes (Neil Young, The Band, etc) and stuck in my head for months afterwards! It also introduced me to Mumford & Sons whose popularity seemed to have risen considerably during the time I was away.

Good old Daniel Boone, that worldwide musical superstar Daniel Boone. Never heard of him? Nope neither had I until Ben, Mary and I went to the DMZ Bar in Hue after the 27 hour bus journey from hell.

Whilst we were there having a couple of drinks we were given a free CD, not having a CD player we never actually played this until we arrived in Australia a few months later and bought a car.

The songs on the CD were either terrible cover versions or terrible original songs none of us had ever heard of, except Beautiful Sunday by Daniel Boone was a bit different. I mean it was hardly A Day In The Life by The Beatles, but it had such a disarming charm about it it was impossible not to like it!

“Sunday morning, up with the lark, I think I’ll take a walk in the park, Hey hey hey, it’s a beautiful day” sang the Boonemeister as we all fist pumped along in the car – driving down the Great Ocean Road in the sunshine, this cheery song made our already wide smiles grow even wider.

For what it is worth when this song was released in 1972 it made Daniel Boone a one-hit wonder – selling over 2 million copies and earning Mr Boone the unlikely accolade of ‘Most Likeable Singer’ from Rolling Stone magazine.

All Summer Long by Kid Rock

I don’t know whether it is just my memory being selective here but this song reminds me of being on Fraser Island in Australia, where we did go splashing through the sandbar, did talk by the campfire and definitely didn’t have any internet connection.

I do know for sure I did hear this song a lot in Australia, probably because it made Number One. It also samples both Lynyrd Skynyrd and Warren Zevon so it gains extra kudos in my eyes and whenever I hear it now I do associate it with Fraser Island.

I’ve long been a fan of Jackson Browne and have seen him twice performing live and acoustic in London.

When I arrived in New Zealand in March 2010 I was on a completely new chapter of my travels. I’d spent the majority of Australia traveling with my friends Ben and Mary, but they’d left Australia to go to Fiji, then USA and then home and I had headed to New Zealand.

When I arrived in the country I had broken all traveling ties and was starting afresh again. I remember on one of my first days wandering around Auckland and the neighbourhoods that make it up to try and get my bearings. I was listening to songs on my iPad Nano when this track by Mr Browne came on.

I’d not heard it in a long time but as I watched people rushing around New Zealand’s biggest city I heard the melodic tones of Jackson Browne’s voice singing:

From then on I couldn’t stop listening to it on my travels through New Zealand – it was like I had connected with an old friend. It is beautifully pure and hopeful and set me up for an amazing time in an amazing country.

Mr Brightside by The Killers

I’ve made no secret of the fact I love Queenstown – it is such a vibrant town and the three times I have been there I have had an amazing time.

The first time I was there it was the end of my Kiwi Experience journey – a lot of us from the bus were going separate ways and there were quite a few nights out to say goodbye to various people.

One thing all these nights had in common (or two if you include us getting drunk) was at some point each night this song would be played and we would all be dancing like loons on the dancefloor spilling drinks all over each other. Great times!

Somewhere Over the Rainbow/What a Wonderful World by Israel Kamakawiwoʻole

This song fitted the feeling in Fiji perfectly. Just one man and a ukulele, the dreamy like sound tying in perfectly with the most incredible sunrises and sunsets I have ever seen. I kept finding myself in an almost meditative state lost in a combination of the sight of the sunsets and the sound of this song!

One of the great things about my time in Fiji if I was able to spend it with someone I really liked thanks to the good old hand of fate.

I’d met Faye briefly in New Zealand and we were by chance reunited in Fiji and we soon found we hit it off really well – with a similar taste in music and film and a similar take on life.

On one of our first nights I noticed that in the little notebook Faye had, that she wrote and drew doodles in, she had scrawled some of the lyrics from this Nick Drake song – a song I love and had on my iPod.

We lay next to each other on a hammock one earphone in each ear listening to this beautiful song and watching shooting stars fizz across the night sky, whilst the sea gently washed against the shore just a few feet away.

The fact there are three songs on my list from a relatively short time in Fiji shows two things: 1) With no internet, TV, radio, shops, bars, etc it was a perfect opportunity to relax and listen to music – 2) The place (or more specifically the Yasawa Islands) evoked a lot of unforgettable memories.

I didn’t actually know this song but Faye did and she loved it and invariably I found that what she liked I liked.

Sitting on a desert islands, with a girl I really liked, watching the sunset and drinking a beer in the warmth of the sun I completely got what the band meant when they sang; “Throw those curtains wide! One day like this a year’d see me right”.

I spent two and a half weeks in Fiji and almost every day was like that – so I figure I’ve used up my one day a year like that for the next 17 years, but boy it was worth it!

When I wound up deciding to head back to Australia and ended up living and working there, I quickly adapted the outdoor lifestyle Australian’s are famous for. It was a no brainer really as I was already  an outdoor person in the UK where the weather is much less conducive to such things!

When I was living in Ashfield (a suburb of Sydney) I found myself a running route, which was a ten mile circuit and it was immensely more enjoyable than going out for a run in England. Ninety per cent of the route was off road, so no cars rushing past, it went along a canal, through a park and round a lake and I wouldn’t go much more than 100 metres before seeing another runner/cyclist.

I’d listen to my iPod as I ran and I’d always start my run with this song – its upbeat tempo perfect to kickstart me into action.

Whenever I hear this song now it reminds me of leaving Ashfield Manor and running down Gower Street towards Summer Hill as I started a run that was always immensely more enjoyable than any I had done in England!

On my one of my last days traveling I briefly became a travel God as I sat in a little warung in Kuta Lombok talking to a group of backpackers about traveling. The conversation went around the table about how long everyone had been away from home and where they had gone.

When it came to me there was a gasp of admiration as I said I was coming to the end of an 18 month trip with the group telling me it was amazing and suddenly I was bombarded with questions about where I had been and what I had done.

I realised actually it was pretty amazing.