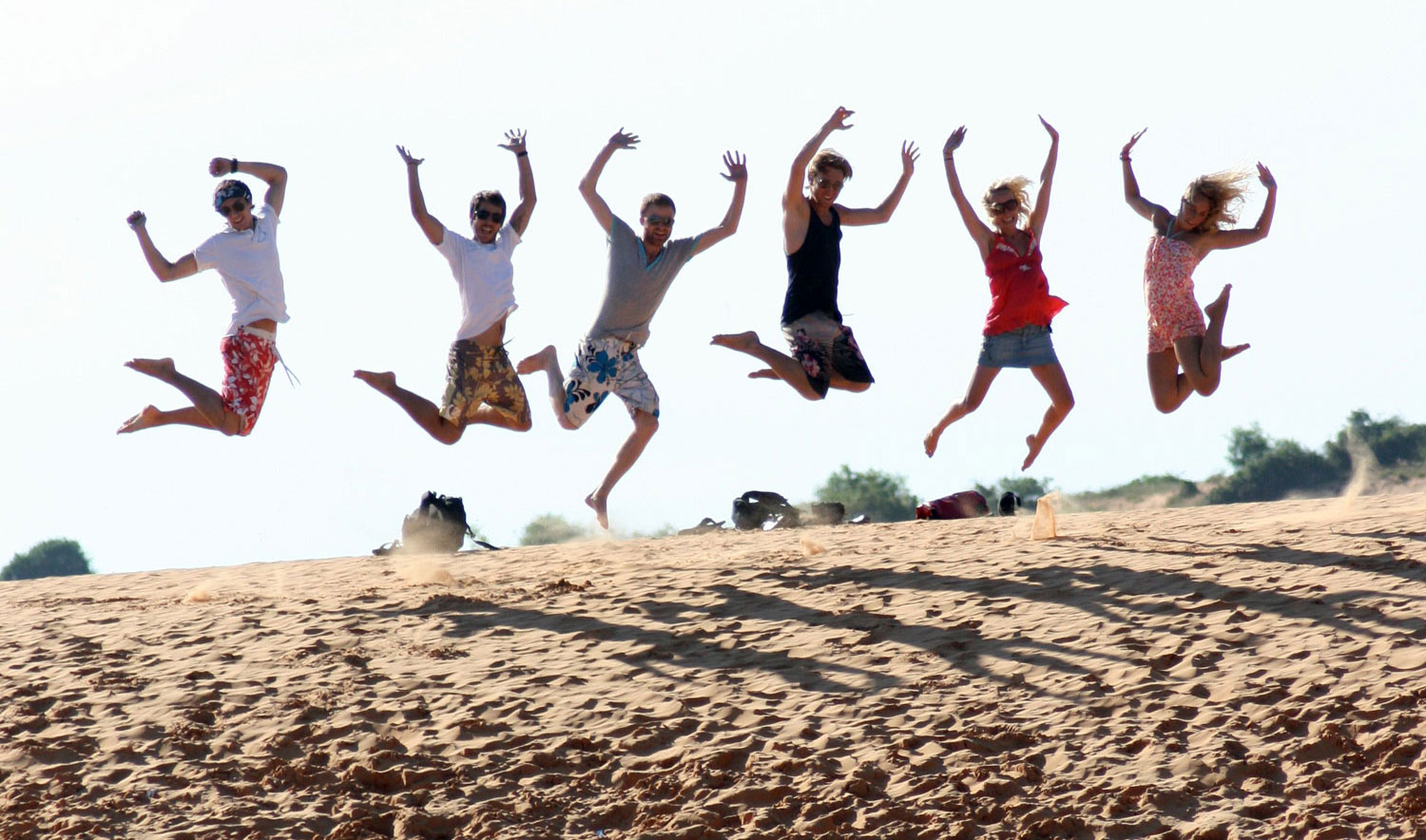 Our last day at Nha Trang was a bit different from the others… We didn’t go to the Sailing Club – this was mainly because we were leaving at 6.45am the next day for Mui Ne!

By now our band of backpackers had swelled to me, Ben, Mary, Tash, Alwyn, Al, Paul and Julia and we all hopped onto our minibus for the five hour journey down the coast. As normal things didn’t go to plan, as a tyre blew out on the way and we eventually reached our destination at 3pm – but when you are backpacking time is irrelevant I guess!

Mui Ne doesn’t really have a centre, everything is spread out along a 10km stretch of road, we found some cheap and clean accommodation and ate at the restaurant next door on our first night.

On Monday, we all felt revitalised after a good night sleep and took the opportunity to visit the sand dunes which had been recommended to us. We got taken to the dunes by a jeep where we were confronted by little kids selling rides on plastic sheets down the slopes. We hired a sheet each for about 50p and then spent the next couple of hours sliding (at quite a speed) down the very steep dunes. Going down the dunes was great fun, but I must say slogging up the dunes in the intense heat a little less so. I had a couple of goes and was then happy to sit at the top and watch everyone else go. The scenery was quite beautiful though and there is something amazing about being stood on top of a sand dune and all you can see all around you are more sand dunes!

Monday evening saw something monumental happen. After getting back from the sand duning and showering and changing we headed out for dinner. As I said by now there are quite a few of us travelling together and this often makes finding a place to eat a little bit harder, as we have to find somewhere 1) we all agree on and 2) that can fit us all.

Anyway we turned left out of our guesthouse to walk down the main road and almost immediately were confronted by a large restaurant called Sizzlers. At first glance we thought it was some American steak house, but we looked at the menu as we approached and it became apparent that the food it served was very much English based.

Now the past month has been great – the food has been delicious and inexpensive – but when we looked at the menu and saw things like roast dinners, steak and kidney pies, full English breakfasts, chips along with homemade pizzas and burgers we all suddenly had a craving for some traditional English food (I know the last two are not traditional English food but you get where I am coming from).

The fact the place was completely empty inside worried us a little, but such was our hunger for some home comforts now we decided to go in. I think we made the owner’s (a chap called Craig) day – he seemed ecstatic to have some fellow Brits to talk to. The food itself was delicious! At least I think it was delicious or maybe it was just because I had spent the past month eating rice and noodles, it just tasted better?! Anyway I had steak and kidney pie and chips and it was as good as any meal I have ever had.

Tuesday was our last day in Mui Ne and we hired bikes and had a bit of a ride around the town which, seeing as it is spread over 10km, was quite tiring. Had dinner in Sizzlers again (minced beef and onion pie –it was excellent!) and then spent the evening in Sankara’s Beach Bar – a swish bar right on the sea.

Mui Ne was a nice little stop and the sand dunes were great, but the lack of a real centre to the town meant it was somewhere I felt you would go to stop and chill out completely and seeing as we had done a lot of that in Nha Trang it was time to move one.

So yesterday we travelled down from Mui Ne to Saigon, or Ho Chi Minh City as it is also known. The journey took around 6 hours and we arrived at 4pm.

I thought I had got used to dodging traffic so far in South East Asia – but nothing could prepare me for arriving in Saigon – they take it to a whole different level here. The roads are absolutely swarming with vehicles, mainly motorbikes here. You would think on the pavement you would be safe? Wrong, if the lights go red many bikes simply skip up onto the pavement to cut a corner and navigate round the lights.

It took some courage to cross the road the first time I did it yesterday, but I soon learnt that basically you take a deep breath, step onto the road and then try and look as confident as possible whilst you stride across. The bikes simply go around you. If you wait for there to be a gap in traffic you would never actually cross the road!

Once we had mastered crossing the road the first thing we did was visit the War Remnants Museum which is a harrowing set of exhibits relating to the Vietnamese War. It was a real eye opener as I have had such a fantastic time in Vietnam it is very easy to forget that within living memory somewhere between a million and four million Vietnamese soldiers and civilians (according to estimates) had died during the twenty years this war raged from 1955 to 1975.

The Museum is split into a series of areas that display armoured vehicles, artillery, bombs and weapons, prisons and torture devices, posters and photos. It was all pretty sobering stuff, but the section that hit home the most for all of us were the photos showing men, women and children affected by the US bombing and napalming. They were disfigured or in some cases dead.

The War Museum is horrific, harrowing, educational, confronting, informative and a must see I would say. It makes you really think about the innocent people caught up in such a terrible situation, the casualties of a pointless war and how lucky we are to live where we do.

Yesterday evening we went out for dinner and a few drinks – including stopping at a roadside bar for some Bia Ho’I, a beer that is brewed daily and then matured for a short period and is cheap even by local standards – it cost us about 40p for a 12-oz. bottle!

Today we further extended our knowledge of the Vietnamese War by visiting the Cu Chi Tunnels. These are a network of interconnecting tunnels that were built to combat the American forces during the War. They are about an hour and half drive from Saigon, but well worth the visit.

The most incredible thing about these tunnels is that they stretched more than 250km, from Saigon to the Cambodian border. Within this network of tunnels living areas were also built, along with hospitals, kitchens, storage areas and many booby traps.

A small area of the tunnels has been opened to visitors – the section is around 250metres long and has actually been widened for Western tourists. We all decided to explore this section of the tunnels but not all of us made it to the end! There are exits every 20 metres or so and lots of people took the option to use them as it was so small and claustrophobic. How the Vietnamese lived down this network of tunnels for years is beyond me. I was glad when I got to the end and was able to come back up to ‘real life’.

Aside from the tunnels there is a command centre where you can eat typical meals that the Viet Cong fighters would have eaten and a variety of horrific booby traps to peruse. There is also an area where you can fire a variety of Vietnam War era weapons, but this held no interest to me whatsoever. I did however buy a pair of flip flops made from real Vietnamese rubber!

I must be honest and say that before this week I had never heard of the Cu Chi Tunnels – but after the past two days I have left with a much better understanding of the Vietnamese War and the horrors all involved in it faced.

Just realised that today marks my one month travelling anniversary – it has been everything I hoped for so far. Tomorrow we leave for country number four – Cambodia here we come!