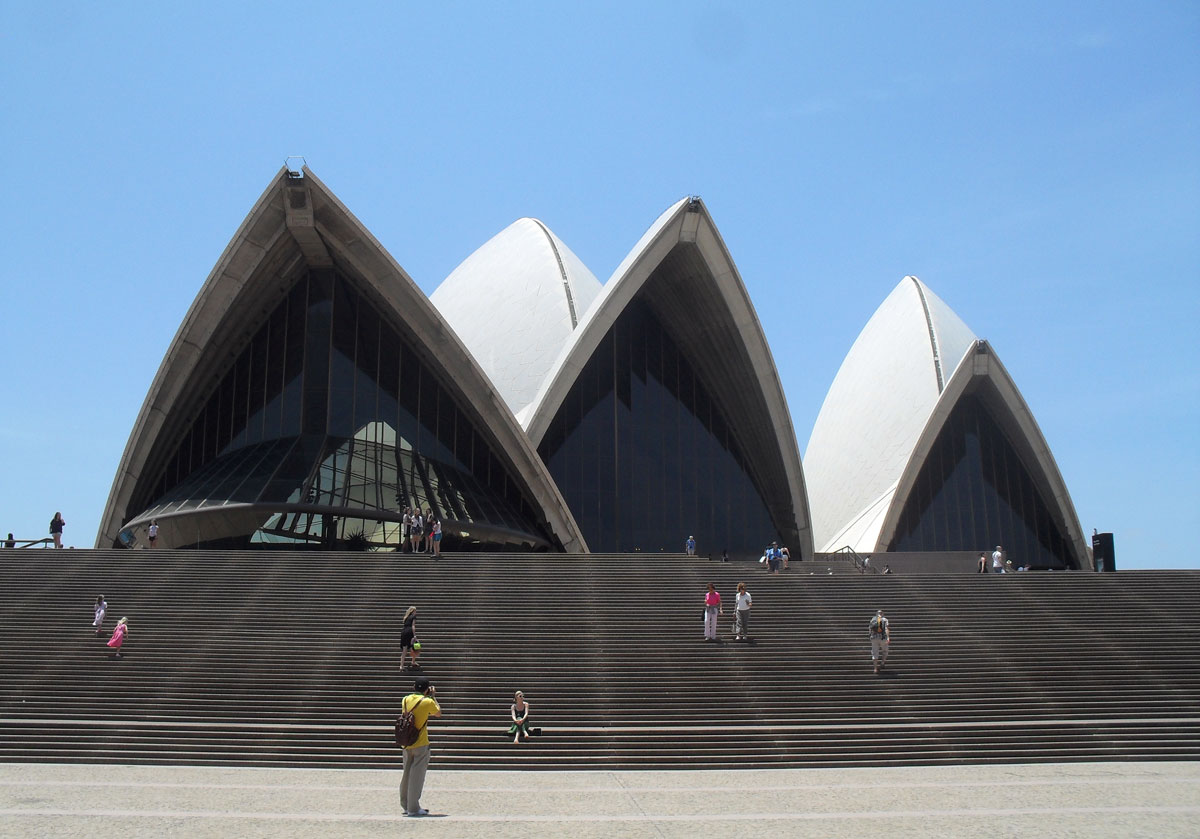 I had a moment a day or two ago that made me realise what I am doing. My friend Amie, whom I had met at beach party in Vietnam, arrived in Sydney about the same time as me. We text each other arranging to meet up, seeing as we had both just arrived in the city and neither of us knew it very well we were having trouble deciding where we should meet.

“Shall we just meet at 7.30pm outside the Opera House?” Amie text.

“Ok then, sounds good, see you then.” I text back.

And then I realised, if I was at home I’d be arranging to meet friends at Tonbridge Station, or in the Slug and Lettuce or at best outside Tonbridge Castle. Here I was in Australia casually arranging to meet someone outside one of the most iconic landmarks in the world!

ONE HELL OF A FLIGHT!

The flight from Perth was six hours – SIX HOURS! Think about that, a six hour flight and you are still in the same country, you could drive six hours in England and be in another country! It also gave me time to reflect on my three month anniversary of traveling. It has been fantastic – I feel like I have changed already as a person and seen so many places and made so many new friends, going backpacking has without a doubt been the best thing I have ever done.

My friend Pete was there to meet me at the airport when I arrived. Pete and I have known each other since we were babies, we went to the same primary school and lived about two minutes away from each other. He moved to Sydney eight years ago and I am very grateful to him and his fiance Shelley that they are allowing me to crash with them.

The next day (16 December) Pete and I got the train from where he lives into the centre of Sydney. We caught up on lost time that first day, mainly over numerous pints of expensive Australian beer but it was worth it. Later that day I also saw Sydney Opera House and Harbour Bridge for the first time.

There is something so strange about seeing the Opera House and Sydney Harbour Bridge for the first time. These are iconic buildings – I associate them with my younger years, when it was New Years Eve and my mum and dad would let me stay up late to see in the New Year.

At some point during the evening’s proceedings they would look at how other countries celebrate and they would always start with Australia and there would always be a mass of colourful fireworks over these two landmarks. The fact they were on the other side of the world just added to their mysticism.

The last week or so in Sydney has been great as I’ve been able to catch up with a lot of friends. Aside from Pete I’ve caught up with Tim and Ben, whom I used to work with, and Phil who used to live in Tonbridge and I used to play football with. I’ve also been out a few times with Pete’s friends, so it has been a very sociable few days.

I caught up with Danni, who I met on my second day as a backpacker in Bangkok, and we went on the Sydney monorail and then the next day to Manly Beach – which is fantastic I hasten to add. Danni and I also met up with Pete and a couple of his friends after they finished work, but with Danni in her “I Love Goon” t-shirt and me in my flip-flops and shorts we felt a bit out of place amongst the suits and well dressed businessmen!

I really love Sydney – there is such a nice feeling about it, and I think with such beautiful weather and an abundance of beaches/rivers/bars/parks/amazing sites it would take a lot for anyone to dislike. I get the impression the Australians have got the right balance between work and play, but it is just a shame it is so expensive for a backpacker (even by English prices).

I am also very lucky to have free accommodation at the moment and have Pete and Shelley putting up with me and including me in their circle of friends which has been great. Tomorrow is Christmas Eve and I am not sure how I feel about it – it just seems strange with it being so warm and sunny here!

6 thoughts on “Life in Sydney – I’ll Meet You Outside the Opera House – As You Do!”