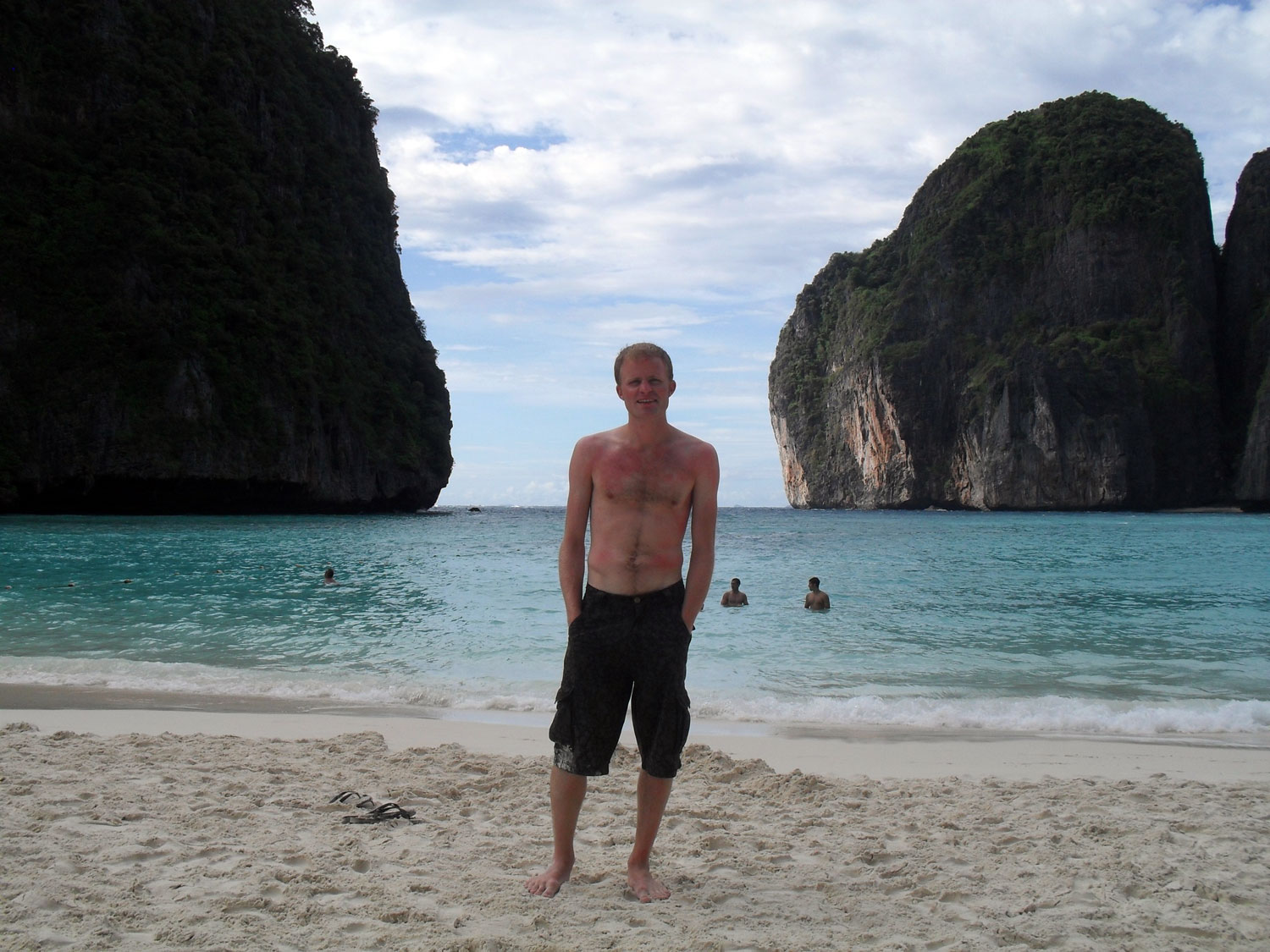 We arrived back in Bangkok for a night after a long journey from Siem Reap – we left at 8am and arrived in Bangkok at 5pm. Being back was strange, it is little over four weeks since I arrived here and started my travels but I got back feeling more comfortable and confident. What is more, the constant hustle, bustle and haranguing you get from the street hawkers which had overwhelmed me when I first arrived I barely noticed, amazing how quickly you get in the backpacking mode!

In Bangkok we found somewhere to stay on Soi Rambuttri again and then had a wander down the Khao San Road. There was another example of how small the world is when you are traveling as, in the middle of the most crowded street in Bangkok, we bumped into Nikki – a girl we had met and spent a fair bit of time traveling with in Vietnam. She was heading to Ko Phi Phi (our next destination) too and would be celebrating her 21st birthday there, so we arranged to meet up.

After that we stopped to eat some fried insects (as you do) and strolled back to our guesthouse to sleep, as I was shattered after four hours sleep the previous night!

Wednesday (21 October) was another early start. We were up at 5.45pm to get a 7.50am flight to Phuket, we arrived at 9am and pretty much straight away set about getting a ticket for the ferry from Phuket to Ko Phi Phi. We eventually got the ferry at 1.30pm and arrived in Ko Phi Phi at 3pm.

Ko Phi Phi is located off of the South-West coast of Thailand and is where the 2000 film The Beach was shot. It was also badly affected by a huge tsunami on Boxing Day 2004 when 11 people died and a lot of damage was done.

We ended up spending eight days in Ko Phi Phi and I have contrasting thoughts about it. It was undoubtedly beautiful, but stepping off of the ferry it was apparent it was also very touristy and built up – a lot of its natural beauty being eroded by the foreign visitors and subsequent development (in fact having just googled it I see Ko Phi Phi gets 1,000 visitors a day).

In some ways this was shown by the fact that accommodation is very expensive here (in Thai terms!) and on our first evening we went out for dinner at a British restaurant! The shops and restaurants are all geared to Westerners. We also watched someone attempted to eat an 8oz burger with a huge amount of sides (they failed) and got told quite seriously by the English guy that owned the restaurant that he ‘had no ribs’. We all fell about laughing, before the obvious dawned on him and he explained he meant there were no ribs on the menu.

Aside from that we spent a lot of time sunbathing, snorkelling and generally relaxing. We met up with our friend Nikki to celebrate her 21st and went to a fireshow at a beach bar before heading on to a beach party (warming up for the infamous Full Moon Party I am heading to shortly on Ko Phan Ngan…).

We also went on a boat trip to Ko Phi Phi Ley to see Maya Bay. This was the beach in The Beach, so to speak. The little boat took me, Ben, Mary, Nikki and her traveling companion Lena to a nearby bay, and from there you walk through shallow water and jungle before Maya Bay opens out in front of you.

Again it is impressive and really beautiful, but then you realise there are about 100 other people there all doing the same thing and it slightly takes the shine off of the moment.

A couple of days later, back on Ko Phi Phi we made our way up a fairly steep climb to get to Phi-Phi viewpoint. This took about 30 minutes and was quite strenuous in the heat, but it has to be said the views are quite amazing once you get there – you can see across both sides of the island. Once you are there you can sit and relax and there are stalls where you can buy ice cream and cold drinks.

The path to the viewpoint is clearly signposted, and as we started it we were reminded of the impact the tsunami five years previously had. There were signs out side shops, one in rather clunky English, from a shopowner expressing his thanks to the people who helped him ‘from the crumbles’.

There was also another of those weird traveling moments that I am becoming accustomed to now when we bumped into a girl in a bar whom we vaguely recognised. After all of us spent a few seconds racking our brains trying to work where we knew each other from we realised that we had been in the same minibus from Luang Prabang to Vang Vieng literally a month earlier!

LONG MAY YOU RUN

So essentially these past eight days have been spent on Ko Phi Phi relaxing, sunbathing, drinking, eating and partying, and generally that is what most people here seem to do. It is very much a party island, or maybe we just did not explore widely enough. We stayed in the main part of the island (Ao Ton Sai) near the pier where boats arrive, which is covered in bars, restaurants, tour operators, shops and accommodation.

It is in a stunning location, but just so so busy, I don’t regret coming here for a second and have had a great time – but I think that is as much due to the people we were with as the place itself. If I come here again I think I might try and explore the other side of the island.

Ben, Mary, Nikki and I leave tomorrow (29 October) to get a boat to Phuket where we will stay for a couple of nights before sadly we will go our separate ways – when Ben and Mary intend to head to Malaysia and I will head with Nikki to Ko Phan Ngan for a Full Moon Party!