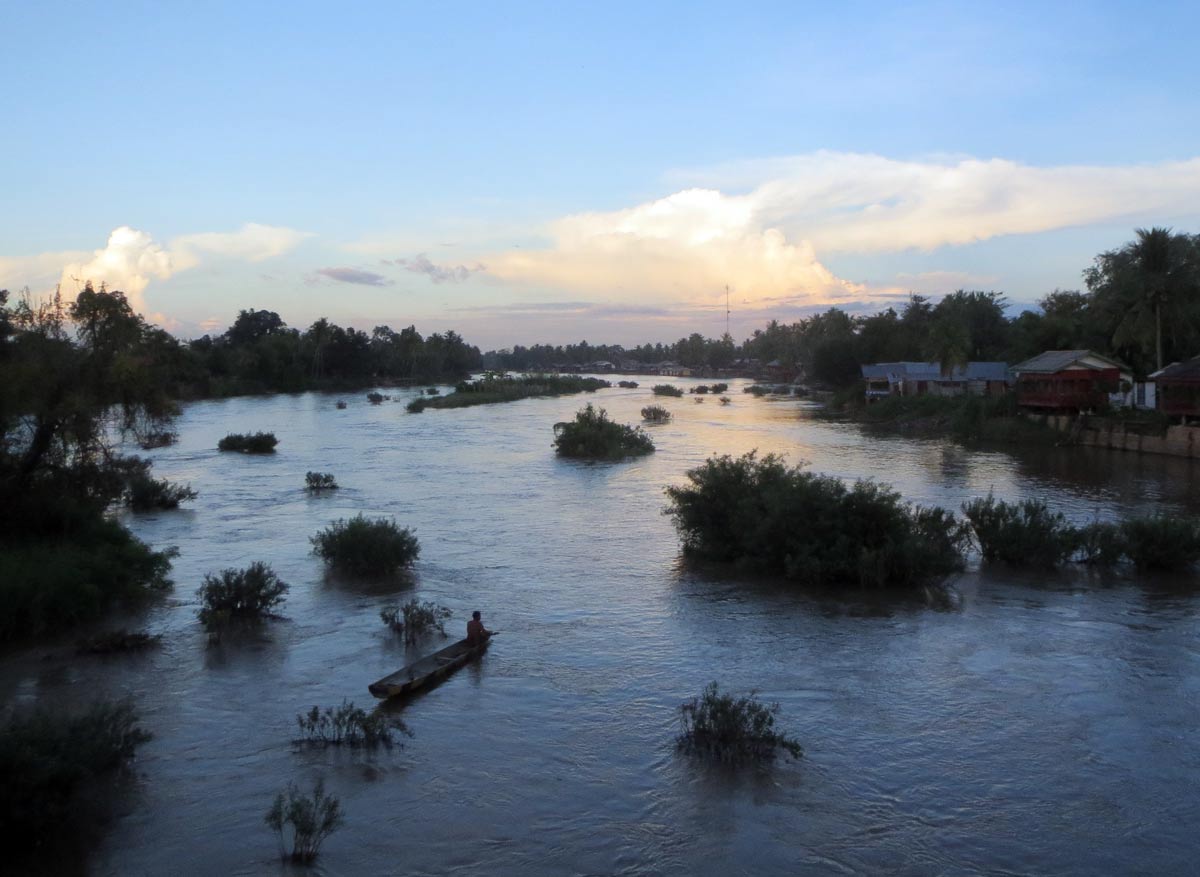 Been there, Don Det

I arrived on Monday (24 November) getting a bus from Pakse and then a boat to Don Det with Macknus and Romy and a couple we met on the bus and we found a nice, and very cheap, guesthouse to stay right on the river.

Don Det is the most popular of the 4,000 Islands – it had a youthful, hippie-ish vibe and a cluster of bars and restaurants near the little harbour area where the boat docks.

You can wander around the Island pretty quickly and once you are a 10 minutes walk away from the harbour it is very peaceful with just a handful of homes and guest houses.

If truth be told I did very little on Don Det apart from relax and explore the small island, our guesthouse, right on the river, was the perfect place to sit and watch the world go by whilst enjoying a Beer Lao of course.

The little bridge that connects Don Det and Don Khon is a great place to watch the sunset, which I did one evening and, whilst it wasn’t quite on a par with the sunsets I saw in Fiji a few years back, it was pretty spectacular

On to Don Khon

I stayed in another nice but basic guesthouse, with a room again right on the river. There is more to see and do on Don Khon though.

On Thursday (27 November) I met up with Aaron who I had initially met in Pai. We hired bikes and took a nice ride around the island and then chilled out at the waterfall and beach there.

Later that day Bob, who I had met in Luang Prabang arrived and became my neighbour! We actually walked the 30 minutes back to Don Det that evening and had a few beers with some other travelling friends at the 4,000 Island Bar but it was nice to then walk back to Don Khon.

On to Don Khong

If I thought things could get much more sedentary I was wrong – for the last few days life has almost come to a halt as I have spent it on Don Khong.

Don Khong is the largest of the 4,000 Islands and to say it is a bit sleepy would be like saying Hitler was a bit nasty. It is so laid back it is practically horizontal. Once you get off the boat there are a few guesthouses and restaurants on the main strip and that is pretty much it.

Consequently I found a lovely guesthouse, almost immediately, with air con and an ensuite and a view over the river for £7 a night.

And then I preceded to spent the next 3 days doing nothing!

On Sunday (30 November) I hired a bike and cycled all around the island which took four hours. I rarely saw anyone else once I got away from the tiny main strip. The highlight was the numerous children that came running over to me shouting and saying hello when they saw me. They all had huge smiles on their faces and it was wonderfully uplifting.

Bob, my friend from Luang Prabang and then Don Khon, followed me to Don Khong, as did two other friends we had met on Don Khon and we just ate, drank and relaxed.

I am currently getting ready to leave Don Khong and can safely say I have loved my few days on the 4,000 Islands. I feel completely relaxed and refreshed.

Everyone of the islands has something appealing about them. Don Det definitely has more of a backpacker vibe and is a great place to hang out and meet people, Don Khon has the most to see and do and a slightly more upmarket field, Don Khong is so so quiet and pretty much the place to go to get away from everything!

Tomorrow I am crossing back into Cambodia  and I will be sad to leave Laos – it is such an incredibly beautiful country. Next I am heading to Kratie with Anne and Ele who I met on the 4,000 Islands.