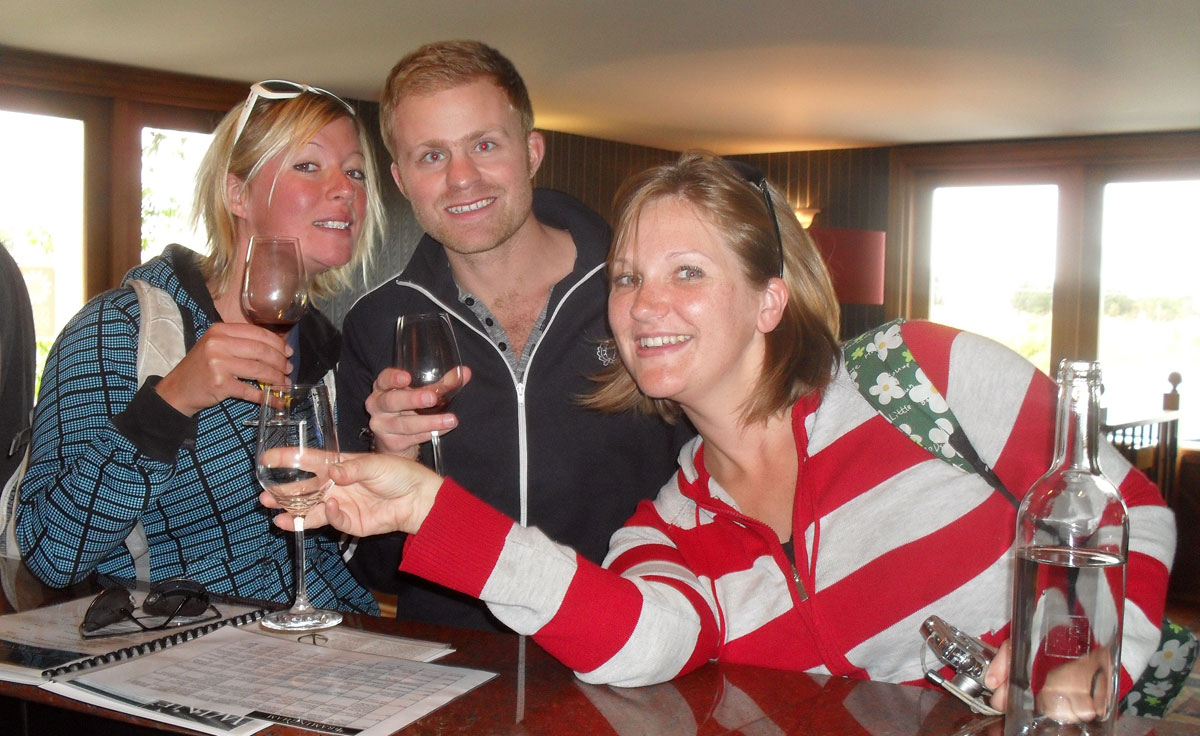 Sometimes when you are traveling everything aligns perfectly and a visit to a town/city can be transformed from a potentially dull time to a great time by the people you meet and I have had two instances of that in the past few days.

The first occasion was in Renwick, where I arrived at around 1pm on Sunday (2 May). Renwick is a tiny town that has the benefit of being located right in the centre of New Zealand’s world famous wine region. Ben and Mary had told me great things about the area and how they’d spent a day cycling around the various wineries getting plenty of free tastings.

I checked into Watson’s Way Backpackers – a lovely clean hostel in the town – but as we are now getting out of the season and heading towards the New Zealand winter it was very quiet. In fact when I arrived the only other person there was my dorm mate who had no real interest in doing the wine tour, which I planned to do the next day.

I was slightly worried I’d end up cycling around the wineries by myself, which wouldn’t be the worst thing in the world, but still everything is better with company.

Anyway later that evening Caz and Ali, two English girls arrived in the hostel and I got chatting to them and they were there for the same reason as me – to go wine tasting!

So the next day we were all up at 9am and out by 10am after hiring bikes from the hostel. Then we spent the best part of seven hours touring the numerous wineries. We must have visited 9 or 10 wineries and had free tasters in all of them. What’s more despite the fast approaching New Zealand winter we had glorious blue skies and temperatures in the 60s.

I got really lucky as Caz and Ali were great and a lot of fun. We all got on really well and it was a totally fantastic day – probably one of the best days I have had since I left home and that is saying something as I have had a LOT of good days as a backpacker!

We had such a good time that when we got back to the hostel about 5.30pm we didn’t want it to end there so went to the pub next door for some food, a couple more drinks and some games of pool.

The next day (4 May) I checked out of Watson’s Way about 10am to get the bus back to Christchurch for one night. I didn’t see Caz or Ali when I left that morning, I don’t know their surnames, and don’t know if I will see them again on my travels. But if I don’t and they somehow read this – you made what could have been a slightly dull day cycling around wineries by myself into a totally fantastic day. You were great company and I was lucky to meet you both.

So my brief one night stay in Christchurch gave me a chance to say a final goodbye to Leon and Michelle. They are staying and looking for work in Christchurch. They too have been great company and I got to know them a lot better when I was traveling then when I was at home.

My second lucky instance occurred on Wednesday (5 May) as I waited for my flight from Christchurch to Auckland. In the airport I saw Lucy, who I had met in Nelson at Abel Tasman National Park when she was traveling with her sister Faye and Rach – who I ended up spending a lot of time traveling the South Island with.

Anyway I got chatting to her – she was heading back to Auckland to meet her sister Faye, where they had a couple of days before heading to Fiji just before me! They are flying to Fiji on 7 May and I am heading out on 9 May and then we both fly back from Fiji on the same day. So we arranged to all meet up in Auckland and talk about travelling together.

The lesson I am continue to learn is that you are rarely on your own for long as a backpacker.

I am in Auckland for four nights and it has been a good opportunity to do some ‘admin’ backpacking stuff! Ie – get all my laundry sorted, have a Skype call with my dad, buy a couple of items of clothing and send some stuff home.

As seems the norm I’ve had a couple of nights out with some of my new dorm mates and my friend Greg who I met on the Kiwi Experience bus – as I bumped into him on my first day back here.

As I mentioned after seeing Lucy on my flight from Christchurch I met up with her and her sister Faye to talk about Fiji. We’ve arranged to stay at the same place on Nadi – which is where you fly into on the mainland of Fiji and then we are considering getting the Bula Pass – a boat pass that allows you to hop from island to island. Ben and Mary had told me to get off the mainland asap and then visit the numerous beautiful islands dotted around the coast of Fiji.

I can’t wait to get to Fiji as, from Ben and Mary’s photos, it looks beautiful and it will be good to travel with two people I know and get on with

After our Fiji chat we then went to the cinema in Auckland and watched Iron Man 2 which was ok. My second New Zealand cinema experience in just over a week and this one, in the huge Odeon cinema in the centre of Auckland, was the complete opposite of the tiny cinema I visited in Akaroa!

Getting ready for the next stage of my travelling adventure

It is strange being back in Auckland now, six weeks after I arrived here to explore New Zealand. I can safely say I love New Zealand, I have had a fantastic time here and met some amazing people. The scenery has been nothing short of stunning, the people friendly and I’ve loved the numerous little towns we’ve past through, each with their own interesting things to see. I’d strongly recommend the Kiwi Experience to anyone thinking about doing it – I had reservations at first – but it has been amazing.

Anyway I am now say in my hostel in Auckland, just about to head to bed before I get up early tomorrow for my flight to Fiji and the next stage of my adventure!

4 thoughts on “I Love It When a Plan Comes Together”