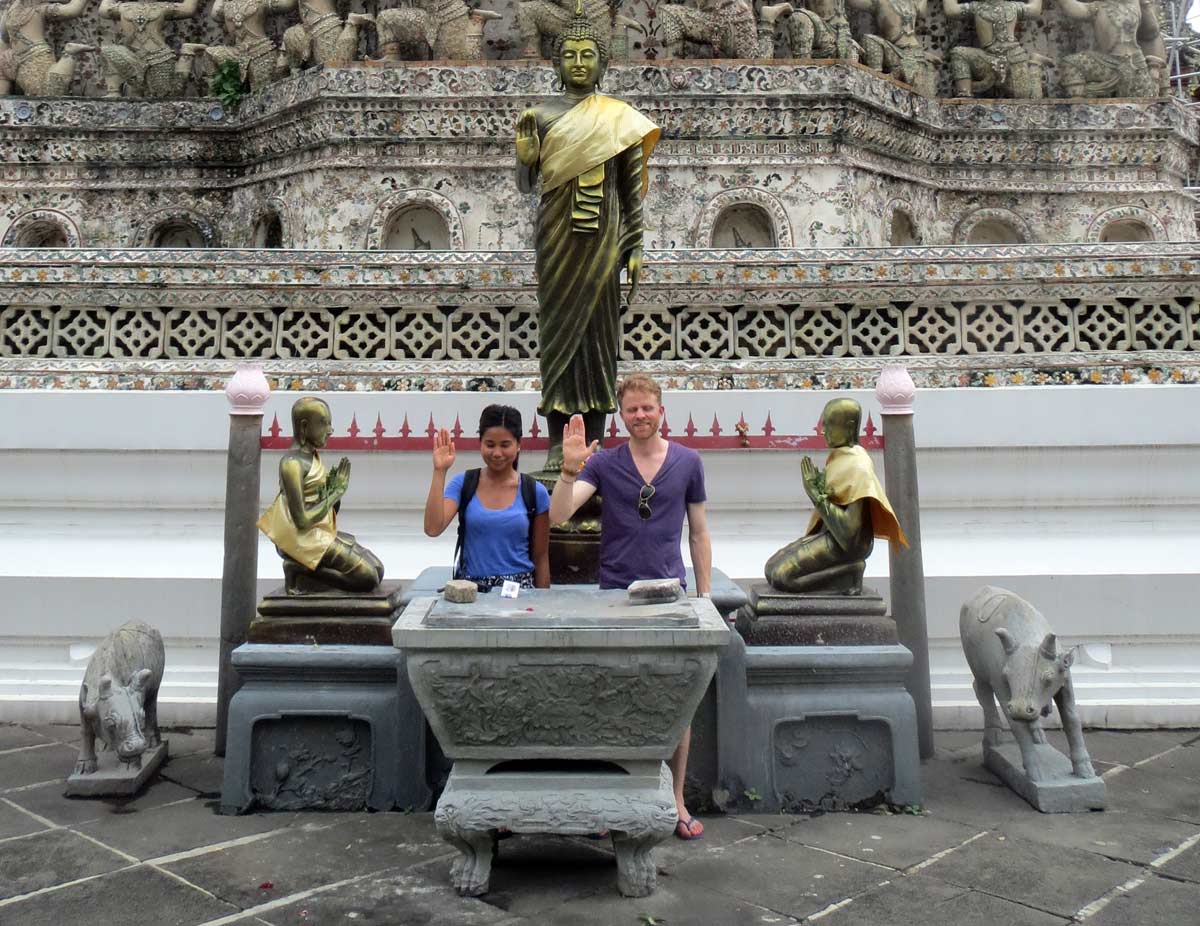 As soon as I realised I would have a spare couple of months in November and December there was only one thing for it. Get my backpack and hit the road again!

I decided to head back to South-East Asia as I loved it so much first time round and there were a few new places I wanted to see.

There was a feeling of nerves, but nothing in comparison to how I had felt when I left England five years before. My dad took me to the airport and we enjoyed a Wetherspoon meal together before I went through security and got on my flight. This time we both knew I’d be coming back in 6 weeks or so, so there were no tearful farewells like last time!

Leaving on a SkyTrain

As much as I prepared myself I was still taken aback by the sheer heat you are hit with when you leave the airport in Bangkok. Also whereas last time I was met by Ben and Mary and we got a taxi from the airport to the centre of Bangkok this time I decided to get the SkyTrain.

It proved to be a fairly straightforward experience. I jumped off at the stop nearest my hostel and got in a taxi and I arrived at Khaosan Immaj. A nice little hostel not far from the Khao San Road, but in a side alley so it was nice and quiet.

It was odd being back in Bangkok. My mind flashed back to arriving here all those years ago. I soon got my bearings and revisited some old haunts such as the Grand Palace. Bangkok remained as crazy as I remembered it.

I was lucky enough again to almost immediately meet four fantastic people, two of whom I am travelling with now and another two whom I am meeting up with in the next week or so.

Jessie and Marnel, two Canadian girls, were in the bunk bed next to me. Marnel particularly endearing herself to me by going out for a run around Bangkok at 6am in the morning! I am planning to meet up with them later in Thailand.

Then Hannah and Leanne, who I am currently travelling with to Chiang Mai from Bangkok were two English girls also in the same dorm room.

Wednesday (5 November) proved to be a particularly energetic day as Marnel, Jessie and I had an extensive wander around the city and visited Wat Pho and Wat Arun, two very grand temples. We walked a good few miles on the day and in the heat it does take its toll.

Then yesterday (Thursday 6 November) was another busy day. Jessie, Marnel, Hannah, Leanne and I got up early and went to the Damnoen Floating Market – which is about 60 miles South-West of Bangkok and meant an early start.

The market itself is something that has to be seen to be believed. It is basically a maze of narrow canals that you navigate around by boat. There were amazing fruits, vegetables and a whole variety of arts and crafts on offer. It was evidently a bit of a tourist trap, but it was still pretty impressive.

Then in the evening we wandered around Bangkok as it was Loi Krathong – also known as the Festival of Light and probably the biggest festival in Thailand after the Thai New Year.

Thais put thousands of candles, flowers and incense in lotus shaped baskets and set them adrift on the river. The whole city is lit up with lanterns and candles and gorgeous lights, the parks, the ponds, the waterways, the roads it is a sight to behold and we had a nice evening just wandering around and soaking up the friendly vibe.

Leaving on a sleeper train

Now as I speak I am on the Bangkok to Chiang Mai sleeper train, a journey I made five years ago, with Leanne and Hannah. I remember it being a gorgeous journey, so I hope my memory serves me right and that I get a decent night sleep tonight!

It is good to be back.