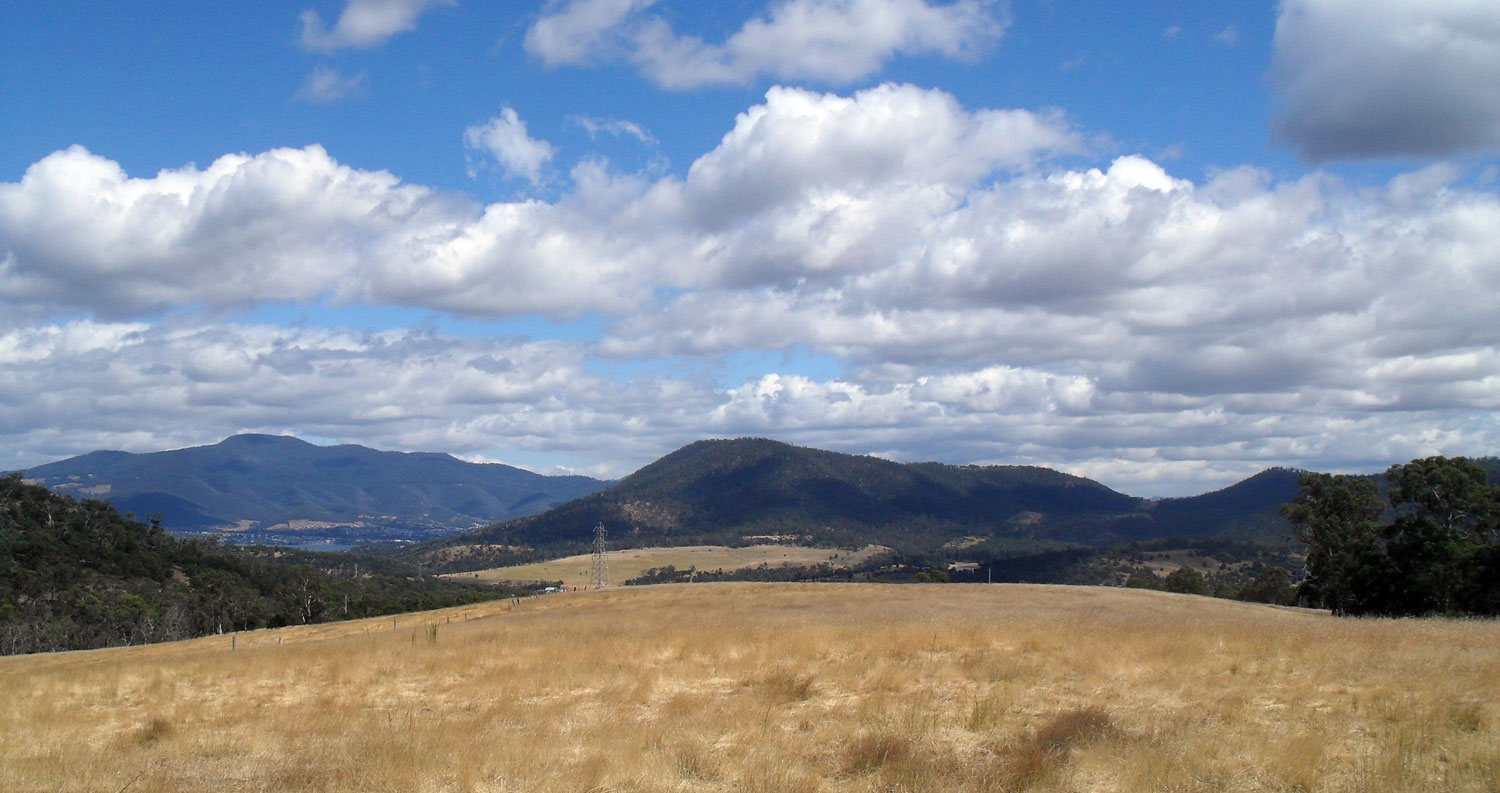 When you are seeing your aunt and uncle for only the second time in 30 years you don’t want to spend the initial meeting walking in circles in a packed airport reception area – but that is unfortunately what happened to me.

After getting off my flight from Sydney I was rather surprised when I went straight through to what was a combined baggage and airport reception area in Hobart Airport. I spotted my uncle and aunt (I’d been studying photos they sent so I recognised them) and went over and embraced them and started to chat to them when I saw my backpack emerge on the luggage carousel.

I went to grab my backpack and haul it off, but one of the strap clips had somehow slipped beneath the carousel surface and got stuck there. I then had the fairly ludicrous situation of having to hold my bag up with one hand and walk with it around the carousel whilst I tree to free the strap (and pushing lots of people out of the way that were crowded around the carousel).

Eventually I got my backpack free and we were able to drive to my aunt and uncle’s house.

HOBART – LAID BACK EVEN BY AUSTRALIAN STANDARDS

My aunt Christine and uncle David have been living in Hobart now for over 20 years. David works in the city and they have a nice property about 20 minutes away from the city centre.

Hobart certainly doesn’t seem like a city, and it is least populated of all of Australia’s state capitals. On my first day here we went down to the harbour and I immediately liked the place. I’ve been to Perth and Sydney so far and there is no doubt they are laid back cities compared to their English equivalents, and Hobart is just the same.

It doesn’t have quite the same sense of pretension Sydney does and people seem friendly and have more time for you. The area around the harbour is filled with pubs, restaurants, museums, art galleries, accommodation and it kind of buzzes with energy, but feels very relaxed at the same time.

EXPLORING THE CITY VIA BEER AND WINE!

I’d been warned to expect Hobart to be noticeably colder, so I was surprised when I woke up on my first day here it was exceedingly hot – pushing 40 degrees celsius, although my aunt did say it was the warmest day they had experienced in a couple of years.

I’ve been on a fair share of tours to explore the city. The first I went on was ‘Luisa’s Walk’ – a dramatised walking tour with live actors that tell you about the colonial past of Hobart – the city was actually founded in 1803 as a penal colony.

Just to quench my desire to learn as much as possible about the beer scene in Hobart I have also been on the Old Hobart Pub Tour! This takes place around the harbour area and is as much a glimpse into the lifestyle, and characters, of early Hobart, as it is a pub tour. This was great fun!

To prove I am not prejudiced I have also been on a winery tour at the Coal Valley Vineyard with my aunt and uncle and was another lovely day spend sampling local wines.

One of the most iconic landmarks in Hobart is Mount Wellington which rides high above the city – it is just under a mile high and my aunt and uncle had told me I must see it.

The drive to the summit of Mount Wellington is something in itself. As you can imagine it is a series of twists and turns and very, very steep inclines – amazingly we saw quite a few people cycling up the hillside – I was exhausted just going up in the car!

The views at the top are out of this world though and totally worth the long and slightly nauseating drive. To make up for the terrible views I had at the top of the Blue Mountains, it was a completely clear day here and I had a wonderful view across Hobart and its surrounding environs. If you are in Hobart try your best to make the peak of Mount Wellington. As you can imagine it is a lot cooler at the top, so if you go pack a jacket.

I get the impression that Tasmania is full of picture postcard towns. I also visited Richmond – which is a little town about 20 minutes from Hobart. It is full of historic, Georgian style buildings, and plenty of cafes, restaurants, tea shops and art galleries. The centre piece is Richmond Bridge which was built by convicts in the 1820s and is apparently the oldest bridge in Australia.

Then a couple of days ago we went to Kettering – another small town about 20 miles in the opposite direction to Richmond from Hobart. My uncle has a small boat, so we spend most of the day drifting along on the water eating oysters and drinking wine – at this point I felt far removed from my backpacker lifestyle!

Yesterday was my last full day in Tasmania and I was very lucky that my aunt and uncle treated me to a speed boat ride around Bruny Island – which is a reasonably large island located of the South-East coast of Tasmania.

We learnt a little about the history of the island – it was originally inhabited by the Aborigines and then in 1773 the first recorded Europeans landed at the island, then we were off! The tour was pretty exhilarating as we shot between a variety of rock formations and flew around the coast at top speed.

We also saw plenty of wildlife, including some dolphins coming over to swim along the boat which was amazing and seals and albatross and much more. The tour guides were really entertaining and it was a really great end to a good few days with my aunt and uncle.

Tasmania wasn’t really on my list of places to visit, and if my aunt and uncle hadn’t been there I probably wouldn’t have gone, but I am so glad I did. It is an incredibly beautiful state and despite it being roughly the same size as England it has a population of only 500,000 compared to 60million in England.

In some ways I wished I had visited more of Tasmania aside from Hobart, because from reading up on it, if you like unspoilt, natural areas, there are a lot of places to see. I’d love to make it back here sometime and take a road trip around the island.

As it is I am now waiting to go back to Hobart airport where I will jump on my flight to Adelaide and then meet up with Ben and Mary for our Great Australian Roadtrip!

Finally many thanks to my aunt Christine and my uncle David for being such wonderful, fantastic and generous hosts.