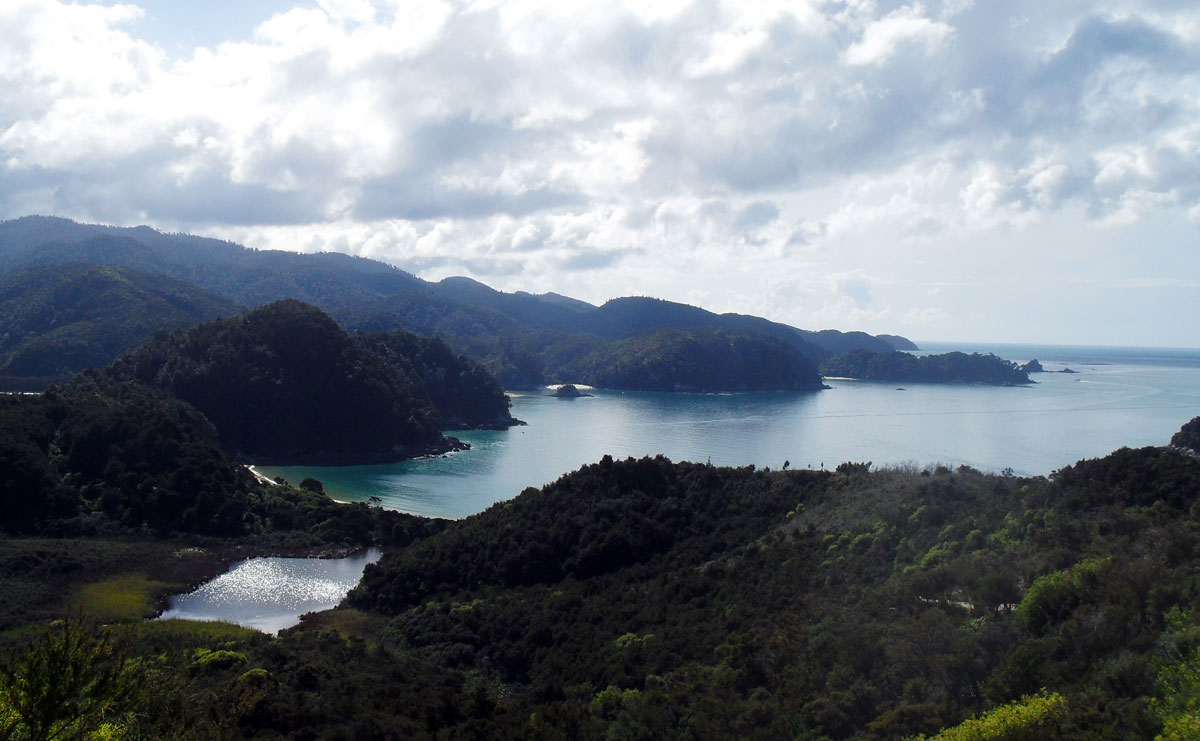 The South Island of New Zealand has been talked up a lot by everyone I have met who has been there and my much anticipated arrival in Nelson was met with sunshine and blue skies – so far I am loving it!

Empty space – lots and lots of it!

One of my favourite things about the North Island of New Zealand is the fact that once you get out of Auckland you pass through lots of tiny little towns, there is no real density of population of any kind, no traffic jams, no rows of cars parked down every road. I liked this about Australia too – the spaced out nature of the place, the wide open landscapes.

Visiting the centre of New Zealand

Anyway my first stop has been Nelson. Our ferry from Wellington docked at Picton and then the Kiwi Experience drove the 130km to Nelson. The drive was amazing, I just found myself staring out of the window open mouthed at the landscape.

I learnt from my previous Kiwi Bus experience with the hostels they recommend and booked myself into my own hostel independent of everyone else. I am glad I did as the hostel I stayed at, Trampers Rest, was tiny but incredibly homely – just like staying in someones house. I immediately met a Norwegian chap called Lars and two Taiwanese girls, Rebekah and Mindy, and we went out for some drinks in the evening in Nelson, getting back about 2am.

Another plus point of the hostel was it had the most incredibly comfortable beds ever. I got a fantastic night’s sleep and spent much my next day exploring the city. Nelson is a relative behemoth of a city by the South Island of New Zealand’s terms – it is home to 66,000 people and the third biggest place on the Island after Christchurch and Dunedin.

On Monday I had booked myself onto a trip to Abel Tasman National Park – the smallest of New Zealand’s 13 national parks. In a way I felt like I had been there already as the day before Rebekah and Mindy, the two Taiwanese girls staying at my hostel, had shown me the photos they had taken of their visit there. One thing I have learnt about people from Taiwan – they like to take photos – between them they had taken almost 1,000 photos of this part of their trip!

Anyway this meant an early start – I was up at 6.30am to get on the bus. The bus journey there took about two and a half hours and was fairly eventful – the driver hit a road sign whilst turning out of a road and it smashed the back window! Anyway we eventually got to Abel Tasman about 9.30am.

I then had the most beautiful peaceful and scenic walk ever, walking from the coach drop off point out to Anchorage Point and back again. It was around 25km in all (and I did it all in flip flops!) and I got back about 4.15pm.

I was by myself the entire walk and after spending so long around people all the time on buses and in hostels I really enjoyed having some time and space to think about my trip and what I have done so far. The weather was perfect, the landscapes and views unbelievable – it was a fantastically relaxing day.

When I got back to the pick up point I had around an hour to wait until the bus home so I bought myself a drink from the cafe and sat down to relax. Getting back just after me were three English girls who I had spotted on the bus on the way out – Faye and Lucy were sisters and Rachel was someone they’d met on their travels. I had a chat with them and they all seem really nice. What’s more Rachel was also on the Kiwi Experience and was planning to move on the next day from Nelson like me.

From sun to rain

So yesterday morning (Tuesday 13 April) I left my hostel to get on the Kiwi Experience Bus again (another early start – the bus left just after 8am). At the next stop Rachel got on and sat next to me and we chatted as we wound our way out of Nelson – which is a thoroughly lovely city. Also just to add in another little fact it is one of the sunniest places in New Zealand, getting around 2,400 hours of sunshine a year. In comparison London gets 1,500 hours and Melbourne gets 2,100. Even places like Brisbane and San Diego, which are famed for their year round sunny climate don’t get much more, at 2,750 and 3,000 hours respectively.

We were on our way to Westport where we spent last night, but we stopped at Nelson National Park and Lake Nelson. Again the landscape here was absolutely incredible, and there were relatively few people here. I am sure if we were at a comparable site in England it would be thronging with people.

When we arrived in Westport yesterday the wall-to-wall sunshine I’d enjoyed in Nelson had been replaced by torrential rain! I was rooming with Greg, who I had met on the Kiwi Experience bus in Rotorua, so we just bought some food, made some dinner, watched some films and went to bed!

So now this morning I am waiting to leave Westport with our destination being Lake Mahinapua where the infamous (so I’ve been told) Kiwi Experience ‘Poo Pub’ (as in Lake Mahinapua, pronounced Ma-he-na-poo-a) will take place. Read all about it in my next blog!

6 thoughts on “Hello Beautiful! Arriving on the South Island”