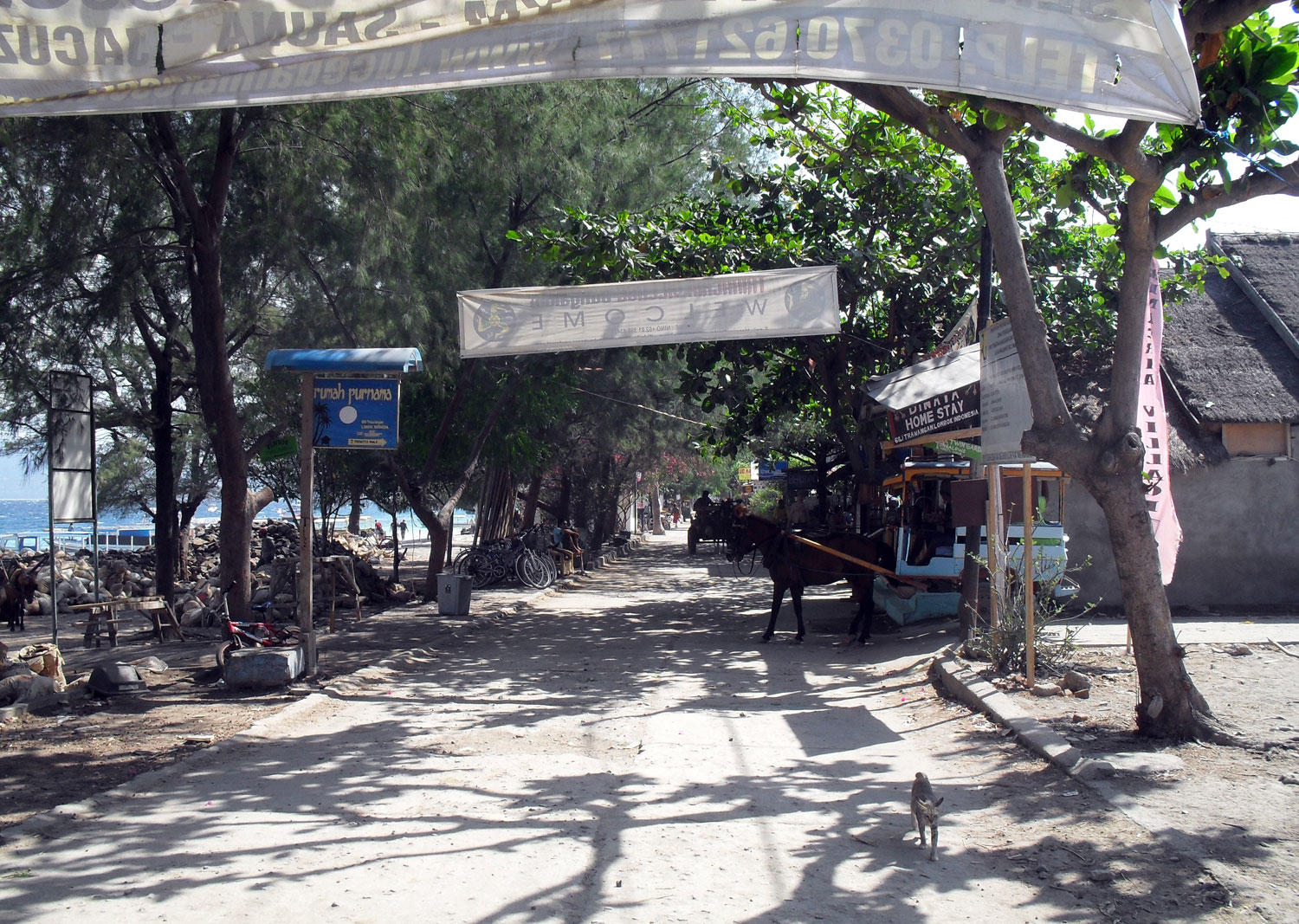 The last few days for me have been great. I’ve spent them on a tiny island, with lots of great people, no traffic and lots of cats – not sure if it could have been any better!

THE SHORTEST FLIGHT IN THE WORLD!

Before getting to Gili Trawangan (Or Gili T as I shall refer to it from now on) we had the little matter of the flight, and little is the word as it took us 15 minutes! To get from Kuta to Gili T there are a few options, you can pay for a fast boat which takes about an hour and a half or you can get the public ferry to Lombok which takes five hours and then the local boat from Lombok to the Gili’s which takes another 30 minutes.

However we flew from Denpasar Airport to Mataram in Lombok, then got a taxi the forty minute journey from the airport to Bangsal port and then a local boat to Gili T. As I mentioned previously I was slightly nervous about flying with Merpati, but as the flight was only 15 minutes that gave us less time to crash!

As it was the flight was really nice, as it is such a short trip you barely get off the ground and get some spectacular views leaving Bali and approaching Lombok. The taxi journey from the airport to the port was equally picturesque, winding through some lovely mountainous terrain. It was a bit of a bun fight at the port but once we got to Gili T we forgot all about that…

THE CASE OF THE AMAZING ACCOMMODATION

When we got to Gili T we did our usual thing of finding a cafe and putting our bags down and getting a drink. Me and Ben then left Mary and Tutts, who is still travelling with us, at the cafe whilst we tried to get some accommodation.

The trouble when you are backpacking in South-East Asia is everyone tells you they have ‘very good accommodation, very cheap price’ and usually they are slightly exaggerating. So when, literally 30 seconds after leaving Mary and Tutts, we were approached by a man offering exactly this Ben and I looked at each other and raised a knowing eyebrow. Anyway we agreed to have a look. We were very glad we did as for once the accommodation was amazing – we had pretty much our own private villa, with a large garden, 50 metres from the beach and it cost us each less than £7 a night – this is where we have spent the last five nights!

Gili T is a bit of a party island. Monday, Wednesday and Friday nights are party nights here, although the days all merge into one when you are a backpacker. It has no roads, so no traffic and cats everywhere you look! Being a small island it has a perimeter of a white sandy beaches and a really nice friendly vibe.

We met a group of three English girls and have ended up hanging out with them for most our time here. There is a great bar called Tir Na Nog, which has lots of mini pagoda type things you can sit in and have your food and drink brought to you whilst you eat dinner and watch a film of your choice. In the later evening the other half of the bar turns into a mini club with people dancing on the tables, etc, etc so there have been a some late nights/early mornings these last few days…

Another travelling first – I have done my first scuba dive! Did it on Wednesday (25 November) spent the morning having some training and then went out in the afternoon. Might just be me and my lack of enthusiasm for water based activities but I found it pretty underwhelming. Once I had got used to swimming around underwater, which is a strange feeling, I got bored pretty quickly and all I could think about was how much longer we would be down there before I got back on the boat. Safe to say it has been crossed off of my bucket list and I have no intention of doing another.

Later that day Mary said something that left me and Ben in stitches, and I am still laughing about now. As I mentioned she has an extreme phobia of rats and it has obviously been heightened as South-East Asia isn’t the cleanest part of the world. I asked her how often she thinks of rats here and said ‘probably around 10% of the time’ I then asked her often she thinks of them at home and she replied ‘less than 0% of the time’. Consequently Ben and I fell about laughing as we tried to get our heads around the fact that that meant that not only does she never think about rats at home, she thinks about them less than never!

Then yesterday (Thursday 26 November) something extraordinary happened – I got very annoyed by the multitude of cats on the island! Ben, Mary, Tutts and I walked along to a little fish and chip shop on the island to get take away fish and chips to each back at our villa. We got back and sat on the patio eating them, within about two minutes it is no exaggeration to say there were about 15 cats slowly approaching us from the bottom of our garden meowing for food. It was like something out of a horror movie as, in the dark, all we could see were numerous sets of eyes moving slowly up the lawn towards us.

Prior to that Trish (one of the English girls we met) and I wandered up the viewpoint on Gili T and watched the sunset, which was quite amazing. It was another of those moments where I was truly grateful to be able to do this – to go travelling and meet people and create wonderful memories.

ITS NOT GOODBYE, JUST AU REVOIR

Anyway sad times today (Thursday 26 November) as I said goodbye to my travelling companions Ben and Mary. They are heading to the other Gili Islands – Meno and Air – and will then travel New Zealand. We will meet back up on January 20 2010, all being well.

I am hugely grateful to them both, as without them I may not have had to guts to pack everything in and go travelling. Even though they are a couple I have never once felt like a spare part around them and the three of us get on really well together and individually. I am already looking forward to our Australian odyssey!

Anyway Tutts and I are back in Kuta, Bali for one night only! We go the boat/plane back to Bali – we are meeting some travelling friends for a few drinks later and then early tomorrow I fly to Singapore where I have two nights before arriving in Australia.