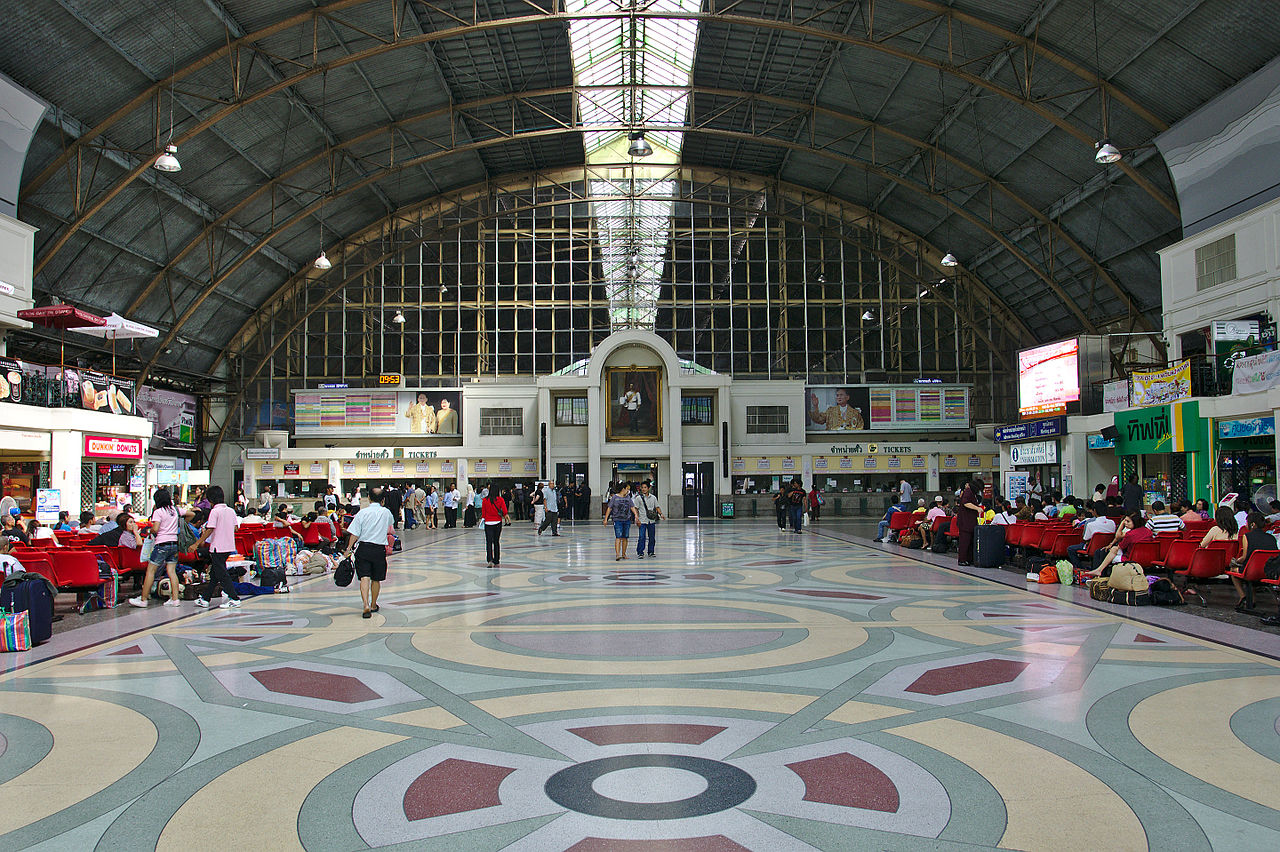 So I found my way to Bangkok Train Station (again remember to ask the driver to make sure he puts the metre on!) without problem. The Station is large, clean and quite grand, unsurprisingly a large picture of the King adorns one of the walls.

I was booked on the 7.35pm train, to arrive in Chiang Mai at 9.45am. I’d gone for a second class ticket which cost me 771 baht, which is roughly £17. Second class means you get a seat that folds up into a bed. Third class means you just have a seat the entire journey, so if you wanted to sleep you’d have to sleep upright.

The Thai Railway networks have very good customer service! I was shown to my seat and given a menu to pick my dinner from, the food was passable (not a patch on the street food in Bangkok but ok) and about 9pm a man came round to make up the beds – as the seats fold up into beds it meant I had to go to bed straight away, but it wasn’t too bad as I had a book to read.

I slept ok, it was a fairly smooth journey, but the seats/beds were not overly comfortable and a low level light is kept on which is hard to avoid. Got up about 7.30am for breakfast but this is where the real beauty of this journey lay. In the daylight I could see the landscapes we were passing through. The hillsides of Northern Thailand whizzed by and they were quite beautiful – long undulating green patches, mountains, forests, I could see Thai people working in the fields as we passed by – it was truly stunning. I kept thinking that this time last week I was sat in an office in Sevenoaks and now I was here! It was a beautiful beautiful journey and beats the 7.53am to London Bridge any day!

Chiang Mai itself is a nice contrast to Bangkok. Despite the fact that is quite a popular destination on the backpacker trail it is so much calmer than the Thai capital – it has a much more relaxed pace of life and whilst there are still touts trying to sell you stuff it is nothing like the constant pressure you get in Bangkok.

It is in the North of Thailand, nestled amongst the foothills and split into an old town and new town. My train arrived pretty much spot on its dedicated arrival time of 9.45am and I headed to the guesthouse Ben and Mary were staying at to find them. When I found them Mary was in traction with a brace around her neck! This was the result of a massage in Bangkok that had obviously not had quite the desired effect. Apparently she had been in a lot of pain on the journey up and they sought out the hospital when they arrived. As a result she has the neck brace on!

Really didn’t do much for the rest of the day aside from wander round Chiang Mai and visit some of the markets. In the evening Ben and I wandered over to a bar to watch football and have a couple of drinks. Mary stayed at the Guesthouse which proved to be a wise decision because as we walked back we turned a corner to find about ten rats in a circle eating something in the road – she has a huge fear of rats so we did not mention it to her!

COOKING UP A STORM IN CHIANG MAI

Yesterday we went on a Thai cooking course. We were picked up and taken to the cookery school at 9.15am and after a brief chat explaining what we were going to be doing we were all given our wooden baskets and headed to the nearby market to buy the food we were going to cook.

The course itself was great fun, but it maybe gave me an over inflated sense of my cooking abilities. Speaking as someone whose repertoire extends to Chilli Con Carne and Spaghetti Bolognese I produce a very tasty Thai Green Curry. But then again all the cooking implements were laid out for me, all the food was also cut up/laid out in the required amounts and we were told exactly when to cook things and how long for! Still it was great fun and I would recommend the Baan Thai Cookery School to anyone.

Today saw us leave Chiang Mai and Thailand for neighbouring Laos and more specifically Luang Prabang. After much deliberation and online research we opted to fly from Chiang Mai to Luang Prabang, which whilst considerably more expensive, would only take an hour. The other option was to get the slow boat which takes a couple of days and costs around £30. The flight set me back £84.

Reading the Lonely Planet before the flight was maybe not the best thing to do as it said many people look on taking a Lao Airline flight as an accomplishment in itself. We hopped on our tiny little propeller plane with about 40 other people with slight apprehension, but the one hour flight was fine, and the tiny airport in Luang Prabang is just about the most picturesque airport I have ever been, to nestled amongst the rolling hills of Laos.

We shared a taxi to the centre of Luang Prabang with two girls from Essex and then found a café in the town to buy a drink and set our bags down. Ben and I left Mary with the bags whilst we tried to find some accommodation. Almost immediately a Lao man approached us and said he had ‘good accommodation, very cheap’, having already heard this line a few times Ben and I eyed each other suspiciously but agreed to follow him and take a look.

ON THE WRONG TRACKS

He was obviously keen to show us, as he was around the corner in a blink of an eye and beckoning us to follow him. Follow him we did, along a narrow alley, through a courtyard, down a dirt track – he was striding out ahead of us at quite a pace and all the time looking round anxiously at us. Ben and I strained to keep up with him, at the same time cursing that he was taking us so far away from the main drag of the town.

Eventually after ten minutes of very fast walking we saw him disappear into a rather shabby looking house, sweat dripping from our brows we followed him in only to be confronted with about eight members of a random Lao family all crowded in a tiny dirty room looking in a rather bemused fashion at us. Somewhere in the journey we had lost the original man who told us of the cheap accommodation and ended up following a random Laotian back to his home without realising – it took Ben and I good 20 minutes to find our way back!

We eventually broke our budget and opted for a Guesthouse very near the place we had left our bags – Villa Champa is lovely, but it is setting us back rather a lot more than we had been paying previously – the princely sum of £10 a night so times you have to splurge out a little when you are traveling!