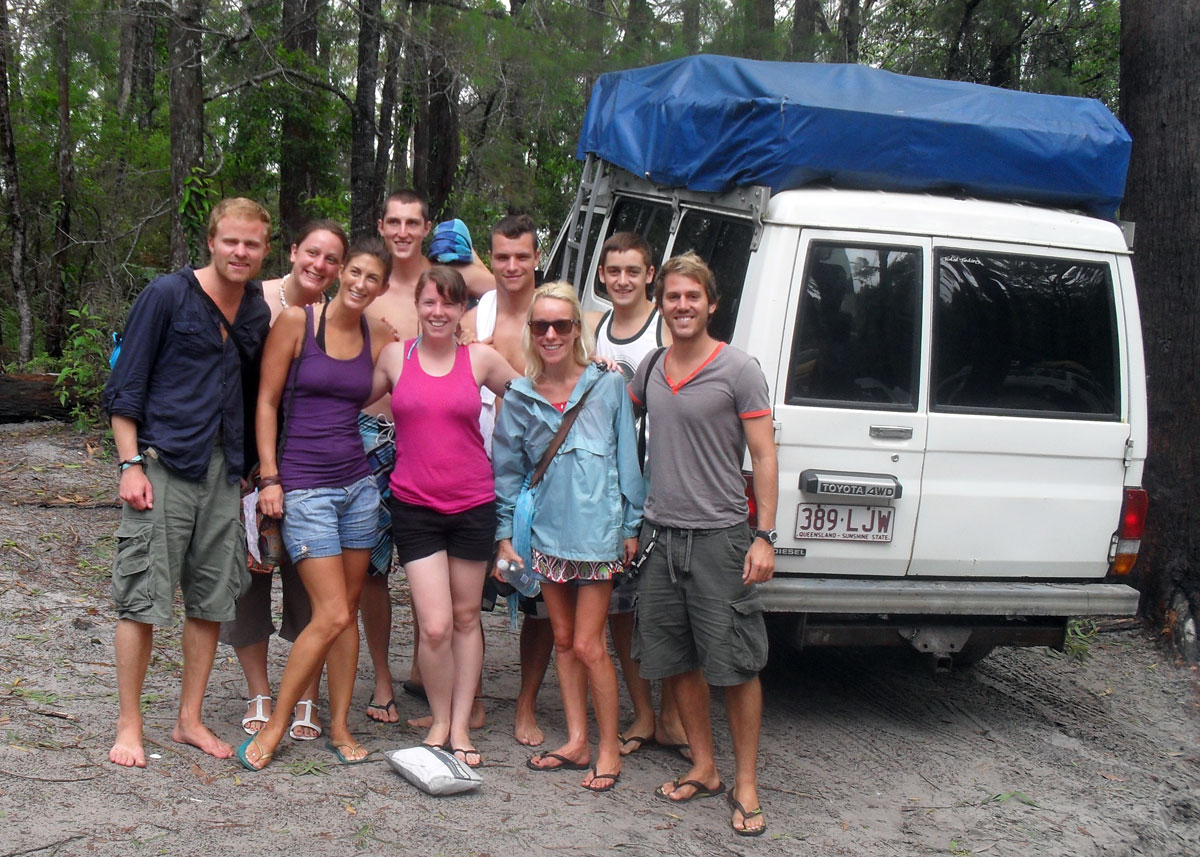 For the past couple of days I have been ensconced on quite a unique island – Fraser Island – and it has been a real experience – both good and bad, but on the whole good! First a few facts about Fraser Island:

This was one of the trips we had booked ourselves onto in Brisbane and it turns out there were just over 20 of us on the trip, split into two groups. We got up around 7am, had a road safety briefing and then drove to the port where a short ferry ride took us to Fraser Island.

A lot of the day was spent getting to know each other and thankfully everyone in our group was really nice and we all got on pretty well. The scary part of the day was driving the 4×4, there were three guys in our group, me, Ben and David – who all took it in turns driving. Being a sand island there are no roads, and it was extremely nervewracking driving the vehicle through woods and over the sand, but thankfully there were no mishaps.

Our tour was a self drive tour, so it was up to us to decide where we wanted to go and make our own way there. We just had our accommodation to get to at the end of each day.

Checking out the landmarks

Our first port of call was Lake Wabby – a green, freshwater lake that is the deepest lake on Fraser Island. The Lake is different from most others on Fraser Island which contain high acidity levels, Lake Wabby has fairly low levels and houses a large number of aquatic life. The first time I felt a fish brush up against me when I was in the Lake still gave me a shock though!

After we’d all chilled out in the Lake for a while (and seen a dingo roaming around!) we then headed to Eli Creek – a large freshwater creek, where we wandered along the boardwalk and the floated down the creek.

Over the years Fraser Island has claimed many ship wrecks and we then went to visit the site of one of the most famous – The Maheno, which was driven ashore during a cyclone in 1935. It is quite amazing to see this ship sitting on the shore and to think it was washed up three quarters of a century ago. It has obviously rotted away, but the actual body is still pretty intact.

From The Maheno we headed to Dondabarra Campsite, which would be our home for the night. Now I am not a great one for camping – I’d managed to avoid it so far on this trip and I think my entire camping experience equals about a week in total and that was all when I was a member of the Cubs!

Anyhow we all settled down at the campsite, all 20 of us, and chipped in with preparing a meal, which we consumed with a few drinks. It was really nice and we all got to know each other better and swapped backpacking tales. Then we all retired to our tents for the night.

The next morning when I woke up it reminded me why I didn’t like camping. I was sharing a tent with my Dutch friend Esther, and we can’t have put it up properly as we had had a lot of rain over night and most of it seemed to have seeped into the tent! Not only that, but as we were on a slight incline any that had come in had rolled down the tent into the far right corner, the exact place where all my clothes I had taken away for the trip were!

So I woke up with a hangover, after just a handful of hours sleep, cold and wet to find all my clothes were wet! I don’t know whether it made matters better or worse that it absolutely hammered down all day that day! It really limited what we could do as we didn’t really want to get out of our 4×4.

The blessing in disguise though was that the campsite we were going to stay at was shut due to the heavy rain so we had to stay in alternative accommodation. The alternative accommodation was luxurious in comparison! Ben, Mary, Esther and I shared our own little apartment with a mini kitchen area, a bed each and hot water – we were in heaven! The place even had a pool!

Our group all met up in the communal area that evening to chat/play drinking games and I think we were all a lot happier to be in the warm and dry, well I know I certainly was!

After a much better night sleep and with some dry clothes I woke up with renewed vigour the following day. It was our last day on Fraser Island and before we went we drove down to Lake McKenzie.

Lake McKenzie is the most visited site on Fraser Island and I could see why, as visually it is stunning. It is a ‘perched’ lake, which means it contains only rainwater, no groundwater and is not fed by streams and does not flow to the ocean. It was quite crowded, but really beautiful and the water was so clear and warm. We spent about an hour there and then headed back to the ferry port to get the ferry back to Airlie Beach.

Back on the mainland

We are back at our hostel in Airlie Beach now for one night and everyone is shattered! Fraser Island was fantastic and we met some great people and experienced some really quite unique. I can now say I have been on the world’s biggest sand island.

4 thoughts on “Fraser Island – the good, the bad and the wet, the very wet…”