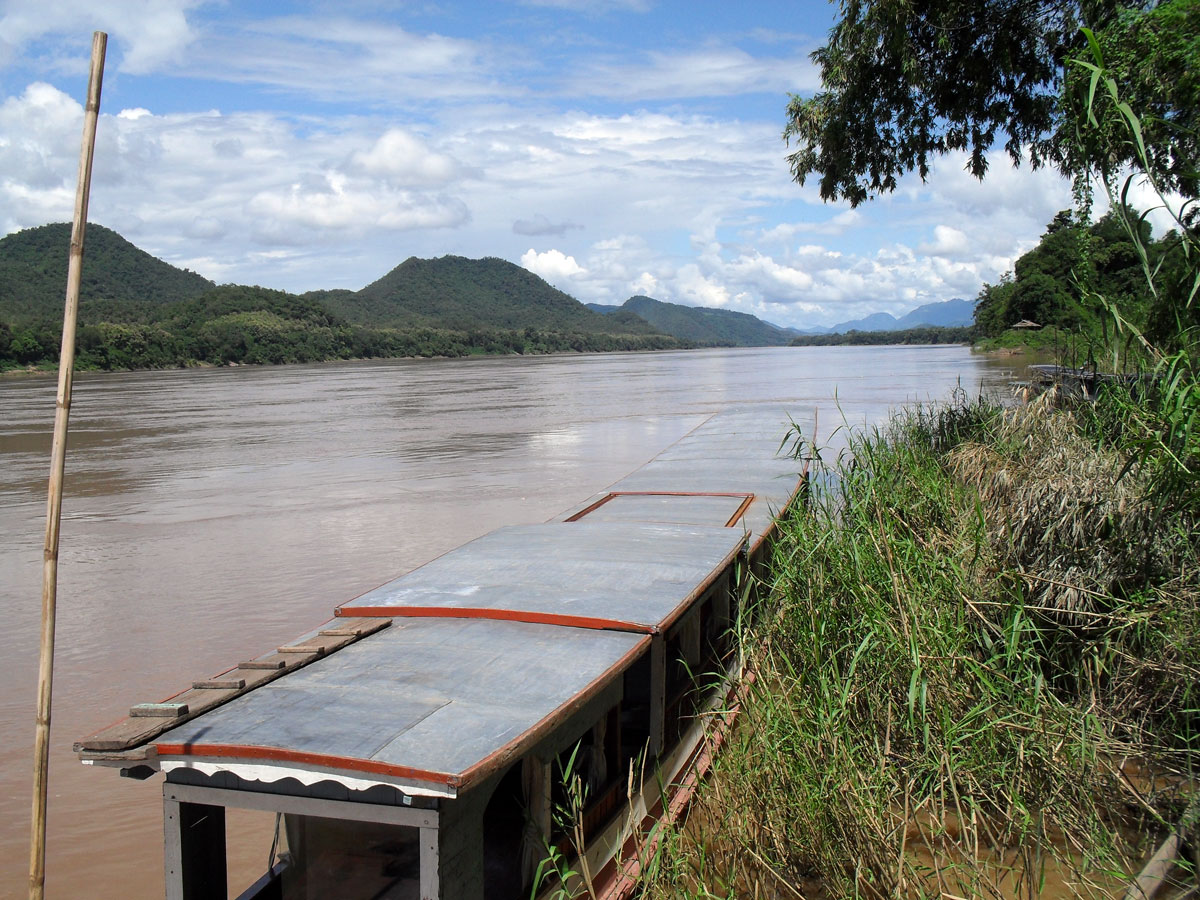 My first day in Luang Prabang was one of my most relaxing ever. It is incredibly laid-back place and set in the most amazing scenery right on the River Mekong and surrounded by mountainous terrain.

It has a strong French influence, as the French ruled the country until the 1950s and is pretty small – no more than a couple of main streets, but it is busy without feeling overwhelming and there are so many lovely restaurants and bakeries. There are numerous temples (33 actually – I just checked) as well as Royal Palaces and Buddhist monks wander the streets freely.

We hired some bikes and spent the day exploring the town and the surrounding area – it was truly stunning and a lovely way to spend the day. Having worked up quite a thirst we found a bar in Luang Prabang called Utopia, and it was one of the most aptly named places I have ever been to. Built on bamboo sticks with an incredible view across the river we spent a good two or three hours completely chilled out, being waited on hand and foot, it was very, very nice indeed.

We went from there to L’Estranger Books and Tea Shop – this, like everywhere else in the city, has a laid-back feeling and apparently was the first licensed book shop in Luang Prabang. It is very cosy and the food and drink we had was quite delicious – we didn’t stay for it but at 7pm every night there is a film screening in the attic room. The only downside was we managed to get sat next to an American couple (who we nicknamed Mr and Mrs Harley Davidson) who insist on telling us everything about where they had been traveling on their Harley and showed no interest in us whatsoever!

Yesterday was a big day – it was Ben’s 30th Birthday! Unbeknown to him Mary had arranged for us to spend a night at a luxury hotel – the Villa Santi (lovely and we all found it childishly amusing that there was a member of staff called ‘Mr. Thongsy’ according to his name badge!). It was just a tiny bit out of the main area of the city but not much. Before we went there we went to Tad Sae waterfalls and spent a couple of hours jumping in and out of the numerous pools and waterfall areas. It was great, but equally as good was the tuk-tuk journey there which took about 30 minutes and again showed off the beautiful mountainous terrain around Luang Prabang. We also had to jump on a small boat to take us across a tributary of the Mekong River to waterfalls themselves and that journey was spectacular.

After lounging around back at our luxurious hotel (just over £30 a night if you are interested) we headed out to celebrate Ben’s 30th. We had some dinner at the Lao Lao Garden and then went to Hive, a bar down a back street where we in took a considerable amount of alcohol before going on to a Luang Prabang institution – the bowling alley!

Interestingly Laos has a midnight curfew – most bars are closed by about 11.30pm so that the people of Laos can wake up early to see and give food to the monks. However, for whatever reason, there is one exception to this rule in Luang Prabang – the bowling alley which is open until 3am.

The bowling alley is a short drive from the centre of the city and every single taxi and tuk-tuk driver knows where it is. As soon as we left Hive we were approached by a cab driver asking if we wanted to go there.

IN THE BOWLING ALLEY

To be honest I have never been a huge fan of bowling, I don’t have the macho bravado to go flying up to the alley and pelt a ball down at 100 mph. Instead I like to walk up slowly and roll the ball down at such a slow speed I usually have time to walk back to the seats and then turn around in time to see it (hopefully) hit the pins. However everyone seemed to be talking about it, so I was prepared to give it the benefit of the doubt.

In all honesty the bowling alley itself was rubbish, but the night was so much fun! You take your shoes off before you enter, so pretty much everyone was wandering around barefooted and then you bowl and drink to your heart’s content. It was packed full of backpackers and there was a lovely atmosphere. We met and chatted to loads of random people and had a great night. This is a must do if you are in Luang Prabang.

THE LONG AND WINDING ROAD

After breakfast this morning it was then time to put our backpacks on and move on from Luang Prabang. We were heading to Vang Vieng, known as the tubing capital of the world – although how many other towns/cities contest them for this title I don’t know.

We arrived in Vang Vieng after a beautiful, but painful six-hour journey, about five of the six hours were spent going up or down very windy mountain roads. The journey was punctuated by two crashes we witnessed (one of which saw a lorry career into a ditch on one side of the road – had it been on the other side of the road, then it would have fallen down the mountain!), and various incidents of dogs/cows wandering into the road and almost causing a crash. Needless to say, when we eventually arrived at about 8pm we were all very happy (and relieved).

We wandered around for an hour trying to find somewhere to stay – before settling on Vilay Vong Guesthouse. By this point we were tired and hungry. More by luck than judgement we found an excellent pizza place just up the road from where we were staying, the food was good and we also had a (good hearted) laugh at some of the English translations on the menu. They included a pizza with ‘cheese in pocket’ and another pizza which included the rather intriguing ingredient of ‘loney bean baby’.

I am now back in my room exhausted and getting ready for a good night sleep before a day of tubing tomorrow!

4 thoughts on “Exploring the beauty of Luang Prabang”