After roughing it a little on our trip to the Whitsundays it was so nice to arrive in Townsville and have a dose of luxury! As I mentioned in my previous blog the boat we sailed around the islands on was fairly basic – we are now staying with the parents of a friend of Ben and Mary who have an amazing house. I cannot tell you how nice it was to have a proper shower when we arrived and then get into a large, comfortable bed with crisp, clean sheets!

We spent a couple of nights in Townsville and our hosts showed us around the city and told us a bit about it and I was impressed. Townsville is the largest city north of the Sunshine Coast with a population of around 180,000 (which is more than Cairns). We took a walk down the Strand – a long tropical beach and a garden strip and also went to the Riverfront.

The city was really easy to get around and seemed a lively and energetic place. What’s more our hosts told us that it gets around 320 days of sunshine a year and much less rain than Cairns, which is the next major city up the coast.

My two nights there were a perfect way to recharge the batteries and be shown around a great city by a couple of locals!

From Townsville we have travelled up to Cairns. Our stay here is going to be bittersweet as there are going to be two partings of the way. Firstly we are selling Waggy, the car that has got us all the way from Adelaide to Cairns, but secondly, and more importantly, this is where our Australian odyssey ends and where I say goodbye to Ben and Mary as they go to Fiji, USA and then home and I go to New Zealand. Sad times. Accordingly we have given ourselves a few extra days here so we can sell our car.

Anyway these first few days in Cairns have been split between advertising our car for sale and partying! For many people Cairns is either the first or last stop in Australia and subsequently there are a lot of backpacker bars to visit where people meet their new travelling buddies or say goodbye to people they have met on their journey.

For Ben, Mary and I we are not only saying goodbye to each other, but also to others we have met. Sophie, Libby, Brent and Chris who we met on our trip to Fraser Island are all here and all finishing their travels so we having been spending time with them.

A bizarre night out at the Woolshed

It was last night, when we went to Sophie, Libby, Chris and Brent’s hostel, that ended up being a great, if rather bizarre night. We arrived at their place about 7’ish and started playing a few drinking games before heading to the Woolshed.

The Woolshed has something of a legendary reputation in Cairns as being THE night out in Cairns, with lots of backpackers, dancing on tables, cheap drinks, wet t-shirt competitions, you get the idea.

Anyway we got there all a little merry after our drinking games, but certainly in full control of our faculties and knocked back some free drinks (this included Libby taking two of her free drink vouchers to the bar and asking for a ‘double wine’, which still makes me smile as I think about it!). We were all generally dancing, having a good time when a bouncer came over and asked me to leave as I was too drunk! 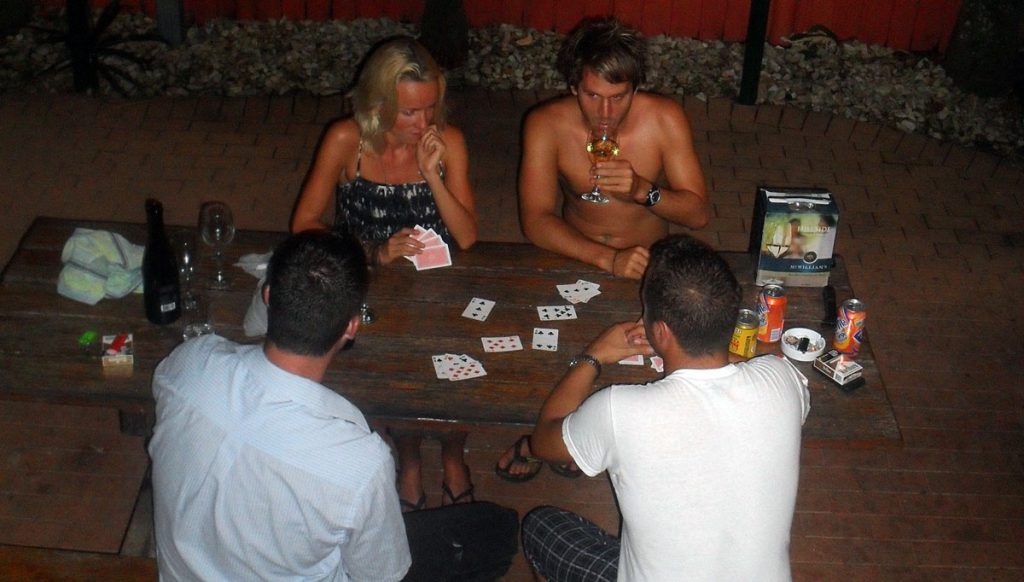 I looked around the bar at people dancing on tables, barely able to stand on the dance floor, spilling drinks all over the place and then asked the bouncer if he was being serious. I was probably the most sober in our group and one of the most sober in the whole building! After, very coherently, explaining to him I was not drunk we all left to go to Gilligans – another huge backpackers bar where we carried on where we left off.

I am still mystified what the bouncer saw to make him think I was too drunk! Nevertheless it was a fantastic night with some great people and once again reminded me how lucky I am to be living this experience.

As I mentioned we have also been putting a lot of effort into selling our car. We’ve walked around the city putting posters up, advertised it on the internet, cleaned it and taken the car to get its safety certificate. Now we just have to keep our fingers crossed and hope we get a few calls about it!

Hi, I'm Steve, the founder of Backpacking for Beginners. I've experienced how amazing traveling around the world is and now I want to help you experience it too.

I left England in 2009 to travel the world. It was the first time I had been out of Europe, but I spent the best part of two years traveling the globe and have been traveling on and off since then. In fact, I even spent time working as a 'travel expert' (RIP STA Travel!).

Taking that first step was very nerve-wracking for me, but it was the best thing I ever did. Now I want to help you live the dream!

Backpacking For Beginners is a participant in the Amazon Services LLC Associates Program, an affiliate advertising program designed to provide a means for us to earn fees by linking to Amazon.com and affiliated sites.

This means that as an Amazon Associate I earn from qualifying purchases by advertising and linking to Amazon.com and other Amazon stores worldwide (at NO ADDITIONAL COST to you).