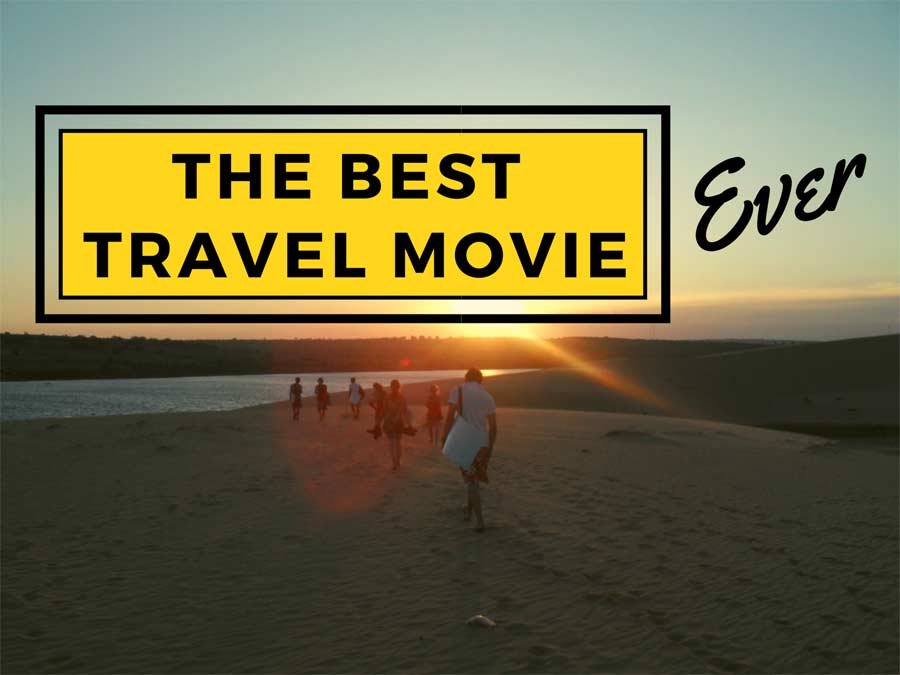 When you think about the best traveling movie ever there are a number of titles that immediately spring to mind for most of us – Into The Wild, The Beach, The Motorcycle Diaries, Wild, The Way…

But for me there is only one film, a film that encapsulate the beauty and freedom of traveling, better than any other…

The thing is, on the face of it isn’t even ostensibly a travel movie. Yet it captures the way you meet people on your travels almost perfectly.

If you haven’t seen it the story is pretty simple. American college student Jessie (played by Ethan Hawke) is on a train back from Madrid to Vienna where he flies home to USA the next day, French student Celine (played by Julie Delpy) is on the same train going to Paris.

The couple get chatting and make an instant connection. Then the train gets into Vienna and Jessie reluctantly gets up and leaves.

He gets back on the train and convinces Celine to get off the train and spend the night with him in Vienna. The film follows them as they walk around the city, finding out more about each other, talking about love, life and everything in between and developing a deep bond.

I won’t spoil how this ends, but it is a beautiful film. If you are all about action movies then this won’t be your thing – this is almost one long conversation between two people.

Why do I love it?

More than anything it captures the complete wonder and excitement that comes when you meet someone unexpectedly and they capture your heart.

When you become so entangled and entranced by someone you forget everything else around you.

The beauty of waking up one morning not knowing someone and by the end of the day you have met someone you will never forget.

In fact I met more people I made a real connection with in my first six months traveling than I had in my previous 30 years at home.

My Before Sunrise moment came in Albury in Australia. With my friends Ben and Mary we were driving from Melbourne to Canberra, we intended to do it in one go, but on the spur of the moment, as we went through Albury, we decide to break up the journey and spend the night there.

We checked into the little, but lovely, YHA and found there were only two other guests there that night. One was a rather rotund Aussie guy with a penchant for public transport the other was a lovely Australian girl called Maddy who was house hunting as she was moving from Tasmania to Albury for work.

As we relaxed around the little pool we got chatting to her. She was really nice and shared the same sense of humour and attitude to life as we did. As afternoon dragged into evening she joined us for a curry and then the obligatory Goon drinking session.

At about 11pm Ben and Mary went back to our dorm and Maddy and I continued knocking back the Goon and talking. I can’t even remember what we were talking about now, but I do remember we made a connection enough to keep talking and drinking until the early hours of the morning.

At 4am we realised we should probably go to bed, as we both had to be up early the next morning and we went to our separate rooms.

The next morning Ben, Mary and I left about 10am to continue our journey to Canberra. Maddy had been up even earlier to go house hunting and had left a short note, that I still have to this day.

That was the only time I spent with Maddy. A total of around six hours – six hours in a life of nearly 40 years, yet I can still remember it vividly and am sure I always will.

The thing about memories like this is there is nothing to taint them. No bad times, no arguments, just a short snapshot during a wonderful period of my life when I had no worries and complete freedom.

Maybe if I had spent a few weeks or even just days with Maddy we would have found out there were things about each other that we both found really annoying, we would have had arguments and fallen out.

But of course we never had enough time for that to happen.

And then there was Fiji…

I spent two and a half weeks in Fiji, nearly all of it on the Yasawa Islands – a collection of literally picture perfect desert islands.

That would have been good enough on its own, but added to that I went with someone I hardly knew at the start of the two and a half weeks, but by the end of it I felt closer to that anyone I had before.

I’d met Faye and her sister Lucy, who she was traveling with, briefly about a month earlier doing a hike around Abel Tasman National Park. We got chatting for a bit and got a bus back into Nelson and then a couple of weeks after that our paths crossed for a day in Queenstown.

A couple of weeks on later I was getting my flight from Christchurch to Auckland, where I had a couple of nights before I flew out to Fiji. After I had gone through security and was in the waiting room who should I bump into but Lucy. She was on the same flight, and her and Faye had a night in Auckland and then were going to Fiji. They were getting to Fiji the day before me and flying out of Fiji the exact same day I was.

Once we we arrived in Auckland we decided to travel around Fiji together.

The 17 days I spent in Fiji were maybe the highlight of my travels. Amazing beaches, crystal clear waters, unbelievable sunsets and someone who I found I liked very much.

A couple of days into the trip we walked with the group at our resort to a local village. It was about two miles or so and Faye and I spent the entire time chatting. We had a similar attitude to life, similar taste in film and music and it was obvious there was a spark between us.

That evening as usual we sat at the bar watching a beautiful sunset and chatting. After everyone else went to bed Faye and I lay in a hammock staring up at the pitch black sky filled with stars. Another thing about Fiji is, as well as the best sunsets I have ever seen, it has the clearest night skies as well. We chatted about our lives and how we could meet up when we were both back.

And that is how we spent the remaining two weeks pretty much.

Lying in hammocks, walking along the beach, drinking cocktails and beer, watching sunsets. There was no TV, no internet, no mobile phones. We talked about anything and everything.

And then it ended.

I said a sad goodbye to Faye and Lucy as they flew to Hawaii and I continued traveling for the best part of a year.

Before Sunrise was made in 1995, the era just before the internet became commonplace and everyone started getting mobile phones. Keeping in touch with someone was harder then, it took more effort.

Did Faye and I meet up again when I got home? Yes we did, on a couple of occasions,, but nothing could replicate those Fiji times.

Sometimes those moments are best left as they are.

If you are of a slightly romantic nature and have ever had a brief encounter when you are traveling you should watch Before Sunrise, I think you will love it.

Have you ever had a Before Sunrise moment when you were traveling? Tell me about it.