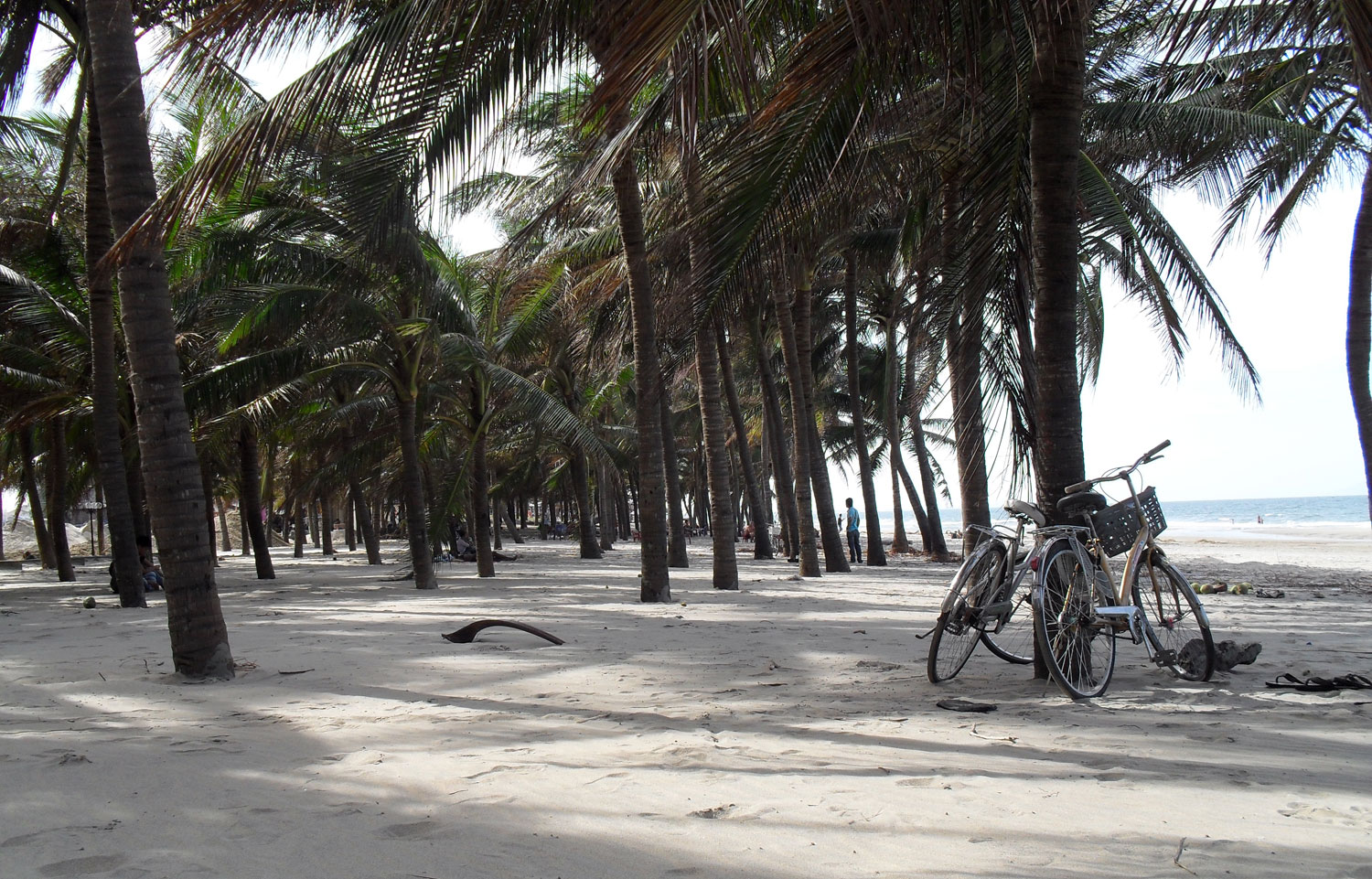 Our time in Hue was slightly restricted as only about two streets were accessible, but we thankfully could get to the DMZ Bar where we enjoyed more than a few Hue Beers as we relaxed after our bus journey from hell. I still can’t reiterate what an amazing feeling it was to get into a nice clean, comfortable bed on Wednesday night after the travails of the previous 48 hours!

We only stayed two nights in Hue and on Friday we moved on down the cost to Hoi An. This time our coach was much nicer (shame this journey was just shy of four hours – we could have done with this coach on our 27 hour journey the other day) and the journey much more straightforward. We met a couple of other backpackers on the bus and looked for accommodation when we arrived with them.

IF THE SHIRT FITS…

Unfortunately Hoi An has also been quite badly affected by Typhoon Ketsana – lots of areas have been rendered inaccessible, however once place we have been able to get to is the beach! So to summarise this is what I have been upto in my five days in Hoi An:

Hoi An has a reputation as being the best places in the world to get a suit handmade, so when we arrived we looked around a few places before settling on A Dong Silk Tailors, which has good reviews on TripAdvisor and we got really good customer service when we popped in. You could tell it was a quality and professionally run shop, whereas some of the others seem a little less organised.

We went for an initial consultation where we gave them an idea of what we wanted and they took measurements, and then three follow up fittings over the next couple of days where they adjusted the sizes. I got a handmade suit jacket, shirt and two pairs of suit trousers for less that £100. A Dong Silk also arranged for the suit to be packaged and sent home, so it is currently winging (or to be more precise sailing) its way to England, so I don’t have to carry it around with me for the next 11 months!

Had another travelling first in Hoi An, I went to my first beach party! On Saturday evening Ben, Mary and I went to the Why Not Bar in Hoi An with our friend Tash, Alwin and Al whom we had met on the coach down. We watched some football and had a few beers. Then this rumour started to circulated that there was a secret beach party happening, and if you want to go you had to speak the girl in the red dress. Ben and Mary were heading back to the hotel, but Al and I decided to stay on. We found the girl in the red dress, she told us the secret location the bus was going from and the time it was leaving and Al and I made sure we were there.

Also rather randomly I was chatting to an Irish guy at the bar and another chap behind him overheard where I was from, and it turns out he lived just a few miles away in Bearsted – small world.

The beach party was great! The 15 minute journey there was something you would never get in England. About 30 crammed on a minibus that probably had 12 seats. There were people sitting on each others laps, people in the aisle, basically people packed into any space possible. Added to that we were all drinking and not wearing seatbelts. Thankfully we didn’t crash…

I spent most of the night sitting on the beach, drinking and chatting to Amie – another English girl who had been sitting on my lap during our minibus journey there. This was another of those moments where I was able to (slightly drunkly) take stock and realise I was travelling! Sitting on an amazing beach, at 1am in the morning, it was still about 25 degrees, I was in good company and had nothing to worry about except for where to go to next!

Hoi An seems lovely, but unfortunately I know we haven’t seen the best of it. It is definitely in a prime location, right on the coast and also situated on the riverside and apparently this area is particularly nice, but this is the area that was very badly flooded so we couldn’t see it.

ON TO NHA TRANG

From Hoi An we went to Nha Trang (where I am as I write this diary entry). We got an overnight sleeper bus leaving at around 7.30pm on Tuesday and arriving in Nha Trang at 5.30am. This was a proper bus that was actually quite luxurious, but it is not that easy to sleep when you are driving along the South-East Asian roads. They are quite bumpy and there are a lot of sharp turns, so just as you are drifting off to sleep the bus goes round a corner, or up a mountain pass, and suddenly you are at danger of flying out of your bed.

My first impressions of Nha Trang are that its inhabitants are extremely fitness conscious! As I said we arrived at 5.30am and as we were driving into the town the streets we literally filled with people out jogging, doing exercise classes in the parks and generally keeping fit – it really was quite remarkable.

Much of my first day in Nha Trang was spent trying to find somewhere to make an overseas call to my bank as my dad (whom I had left instructions with on how to transfer money over the phone in between my two bank accounts) had manage to lock my account! Eventually I did, and at the same time was propositioned (I think) by the attractive, young Vietnamese woman who worked there. She asked if she could come back to my hotel with me and I could help her improve her English! I made my excuses and left.

We are now traveling in a little group. There is Ben, Mary and me, and Tash and Alwyn whom we met in Hoi An. As we were having breakfast just after we arrived we saw Al, who we also hung out with in Hoi An and Paul (the guy I met who comes Bearsted) wandering down the road – they had arrived on the bus after us.

Seeing as we now had our own little gang, we thought it would be rude not to explore Nha Trang’s nightlife – it has a reputation as a party town – so in the evening we had some dinner and drinks and then headed to the infamous Sailing Club – which a friend had told me to visit before I left England.

We had a really great night with new friends. Then, for some reason, Ben and I were convinced there was an England game on TV, so we managed to convince the whole group to leave and head back to the hotel to watch it. Turns out there was no game on at all… Still it was 2am and it probably made our hangovers a little less severe the next day!

And this has generally been how my time has been spent in Nha Trang – we have been going out in the evening and ending up at the Sailing Club, then getting up late the next day and going to the beach to do nothing and then heading out for more food and drinks in the evenings.

Apparently there is an amazing mudbath you can go to nearby, and every day we have had the intention of going there, but we seem to have been magnetically attracted to the beach and have not managed to make it…

TIME TO MOVE ON

We’ve spent three nights in Nha Trang and today we booked our ticket to leave. We are heading to Mui Ne tomorrow. Our group has grown to about ten of us and whilst there isn’t much of cultural value in Nha Trang it has just been a great time meeting fellow backpackers and just relaxing each day.

As I mentioned Nha Trang really is just a party town, where you can go to the beach and go out in the evening. It is nice enough but I think we have had our fill of it now and I am looking forward to getting to Mui Ne tomorrow, which seems a little off the backpacker trail and sounds really nice.