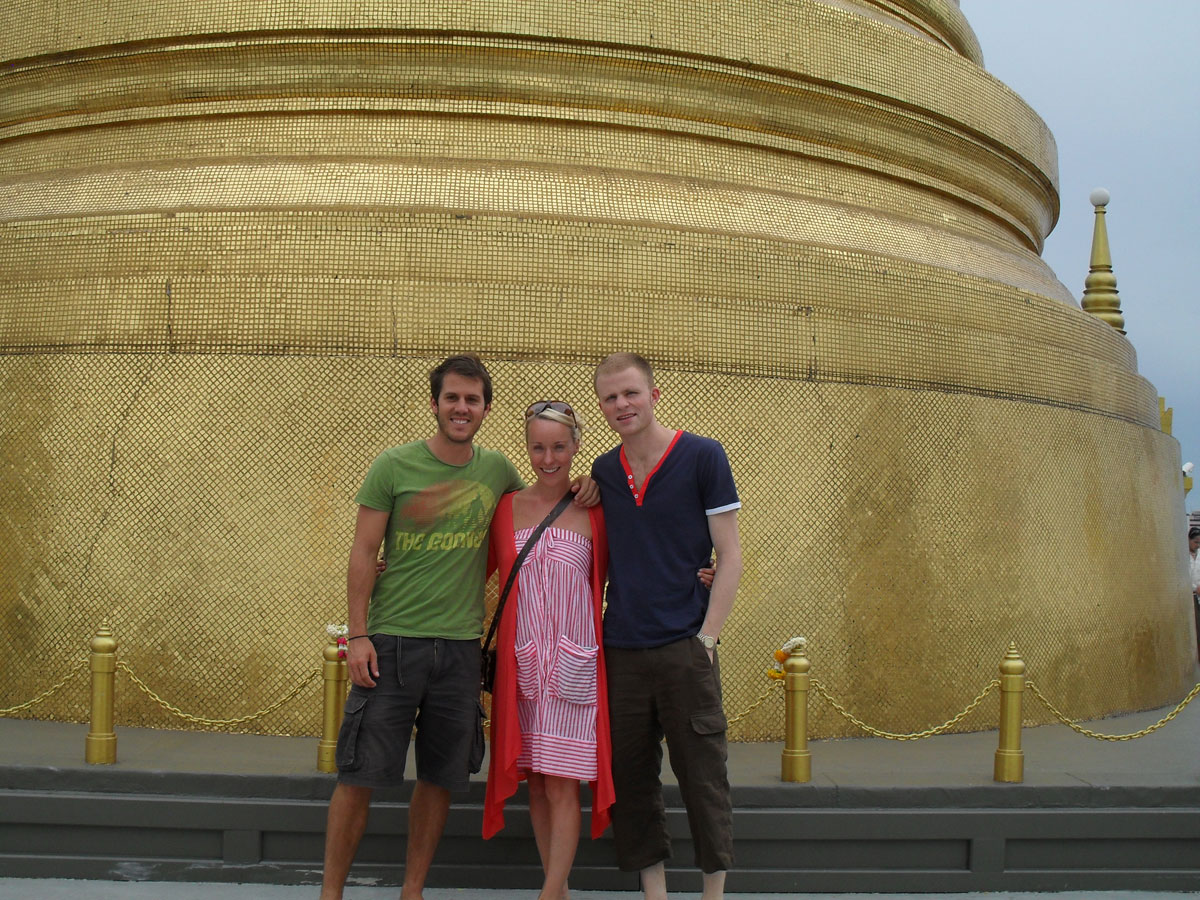 Date: 16 September to 19 September 2009
Where I’ve Been: Thailand: Bangkok
Where I stayed: The Rambuttri Village Inn, Bangkok

So I made it to Bangkok! My first impressions of Thailand’s capital can be summed up in a few words – it is hectic, it is hot, it is cheap and it is smelly.

There don’t seem to be any real road rules, dogs wander round the streets randomly (no cats unfortunately), and you can’t go more than ten metres without being offered a cheap suit, a tattoo or something else (usually some kind of illegal substance or a woman of ill repute).

Thankfully Ben and Mary were waiting from me when I emerged into the arrivals area. After a rather stressful couple of days planning to travel and traveling it was great to see two familiar faces and I immediately started to feel more relaxed. Unlike myself and Mary, Ben has done a lot of backpacking before so it is good to have someone more travel wise around!

We jumped into a taxi (traveling tip number one here – make sure you tell the driver you want it on the meter otherwise he will charge you a random, and usually exorbitant, fee!) and headed towards our hotel where we would be spending the first couple of nights.

I tried to take things in as we drove from the airport to the centre of Bangkok but I was also excitedly catching up with Ben and Mary. To be honest the outskirts of the city didn’t look markedly different from lots of major cities I had been to. Once we got into Bangkok things began to change, mainly in the road etiquette which seems to be like a game of chicken in cars! Lots of beeping horns, squeezing through seemingly not existent gaps, overtaking in risky areas and dodging pedestrians – this combined with the heat and the random stalls on the street selling food and drink made me realise I had made it – I was traveling!

We are staying in the Rambuttri Village Inn, which is down a narrow road called Soi Ram Buttri (Soi is essentially the name in Thailand for a side street branching off a main road). It was within a stone’s throw of the Khaosan Road – the road in Bangkok about which I had heard so much, mainly in a debauched sense!

First amusing story of my travels happened almost immediately. I checked into the hotel and went up to my room – I agreed to meet Ben and Mary up at the rooftop pool where we could chill out. I chucked my bag down and changed and head up to the rooftop pool, where I wait for Ben and Mary… and waited, and waited… Thirty minutes later and no sign of either of them I headed back down to my room. A couple of minutes later there was a knock on my door and Ben asked if I had fallen asleep, I said no and asked where they had been, ‘up at the rooftop pool waiting for you’ he said – turns out this hotel had two rooftop pools and they had been in one whilst I had been in the other!

To give you an example of the price of things here, this hotel is in the centre of Bangkok, the room is fairly basic but clean, en-suite and has a TV, the hotel has a restaurant and two rooftop pools I now know! How much is this costing me? £11 a night! Imagine how much you would pay for something similar in London…

A LONG WAY FROM ENGLAND

So as I mentioned Bangkok is crazy, the little road we have been staying on is packed with stalls selling everything under the sun you can think of, the smell of food being cooked drifts through the air everywhere you go, makeshift bars offer drinks at prices that would probably still have been cheap in England about 20 years ago and taxis and pedestrian share the road in equal measure. The heat is stifling and the place is a constant hive of activity, aside from the fact that most people here speak English it is a long way geographically and in every other way possible from England!

My first ever day traveling was really spent just having a bit of wander and not doing anything too strenuous after the best part of 24 hours spent getting here. We got our visa for Vietnam sorted and then in the evening went for some dinner.

I had a nice Thai Green Curry and we sat and chatted excitedly about the times ahead. The restaurant where we ate was playing the film ‘The Beach’ which was quite apt, and after a couple of Chang beers I was well and truly ready to go to sleep!

WAT I DID TODAY

My first full day as a backpacker, on 17 September, started with a breakfast of pancakes, first time I have had pancakes for breakfast and it was very nice! Another couple of firsts were ticked off when I had my first ride on a tuk-tuk (think of a more open air, slightly less glamorous version of a Reliant Robin if you can) and my first ride on a river taxi as we visited some river markets and a few of the numerous Wats (Buddhist temples) in Bangkok.

The real fun began in the late afternoon. At the early stages of my travel planning I had been in contact with a couple of people through a travel forum, one of whom – Danni – was planning to start her trip in South East Asia around the same time as me. We kept in touch and arranged to meet in Bangkok, I gave her the address of our hotel and we waited for her to arrive.

I was slightly nervous, we’d got on well via email, etc, but what if we couldn’t stand the site of each other in person?! I needn’t have worried, she jumped out of her taxi and within minutes it felt like I had known her all my life, the four of us chatted away six to the dozen. We had a dip in the rooftop pool (the same one this time) to cool off and then we all got changed and I mentally prepared myself for my first ever whiskey bucket…

BUCKETS OF FUN IN BANGKOK

To say the night was slightly messy would be an understatement – and I will try and recount it as best I can remember. It started quite civilised, a meal and a drink near out hotel then we stopped for more alcohol in VW Campervan/bar and then we headed to the Khaosan Road and shared a couple of whiskey buckets between us… And this is where it began to get messy.

For those of you that don’t know a whiskey bucket is a flask of Thai whisky, a bottle of a Thai energy drink and a can or two of Coca Cola. It is all poured into a bucket, a load of straws chucked in and then you drink it. We did this four times (I think). The rest of the night went by in a blur, I remember chatting to random people, dancing, drinking more. I remember Ben and Mary went back to the hotel, Danni and I carried on drinking for a short while before we both realised we were already totally smashed and probably we should go back to.

Despite the fact it was literally about 400 metres back to our hotel, and it was just a case of going to the end of the Khaosan Road turning right and then taking the first left to get home, Danni and I got lost. I have hazy memories of approaching random people in the street and getting my wallet out (filled with thousands of Thai Baht) to find the hotel card and see if anyone could point us in the right direction. Then at some point Danni and I had a ‘cat off’ when we saw a stray cat in the streets and we both knelt down to beckon it over in opposite directions (I won). Then somehow I made it back to my room and to bed.

About four hours sleep, oppressively hot 33 degree temperatures and numerous whiskey buckets did not make for a pleasant feeling yesterday morning! The four of us literally did nothing today, which was good as it was about all I could manage. I actually started to feel worse as the day went on, not really sick but just queasy. Managed a tiny portion of dinner, then Ben and Mary headed to the train station to get the train to Chiang Mai and Danni and I hung around the little street we are on whilst I felt sorry for myself.

Woke up this morning feeling a lot better than yesterday, however even before heading outside it was obvious it was raining. Heavily. Not the heavy rain we get here in England, but absolutely torrential, soaked through after two steps, type rain. Danni and I found somewhere for breakfast and then used the internet and then it was time for us to go our separate ways with a promise to meet up again in Australia. Danni was heading off on an STA Travel organised group tour of Southern Thailand.

I helped her find her hotel, which was around about a kilometre walk from where we were staying. The walk was pretty uneventful, oh apart from the fact we got stopped by a menacing Thai soldier with a gun. This was a stones throw from Danni’s new hotel – he stood in front of us as we walked towards it and said something in Thai. Not being fluent in Thai (although I have now learnt ‘Sawasdee’ – hello and ‘Kob Khun’ – thank you) we looked confused and tried to explain we needed to get to the hotel. As soon as he lifted his gun we stopped dead in our tracks, he was trying to explain something to us and pointing down the road, and then in the far distance we saw what looked like a royal cavalcade. The cars proceeded to go past us and then he smiled and ushered us on. I am still not sure what it was, but presume it was something to do with the Royal Family, which is a huge thing here in Thailand (posters of the King adorn numerous walls).

I walked back from taking Danni to her hotel feeling slightly deflated – I had gone from a group of four to just me! However I now face my first big challenge of the my travels. I write this as I sit in my hotel lobby waiting to get a taxi to the train station and then a 12 hour train to Chiang Mai to meet Ben and Mary again! I struggle getting a train myself into London so fingers crossed this will go ok.