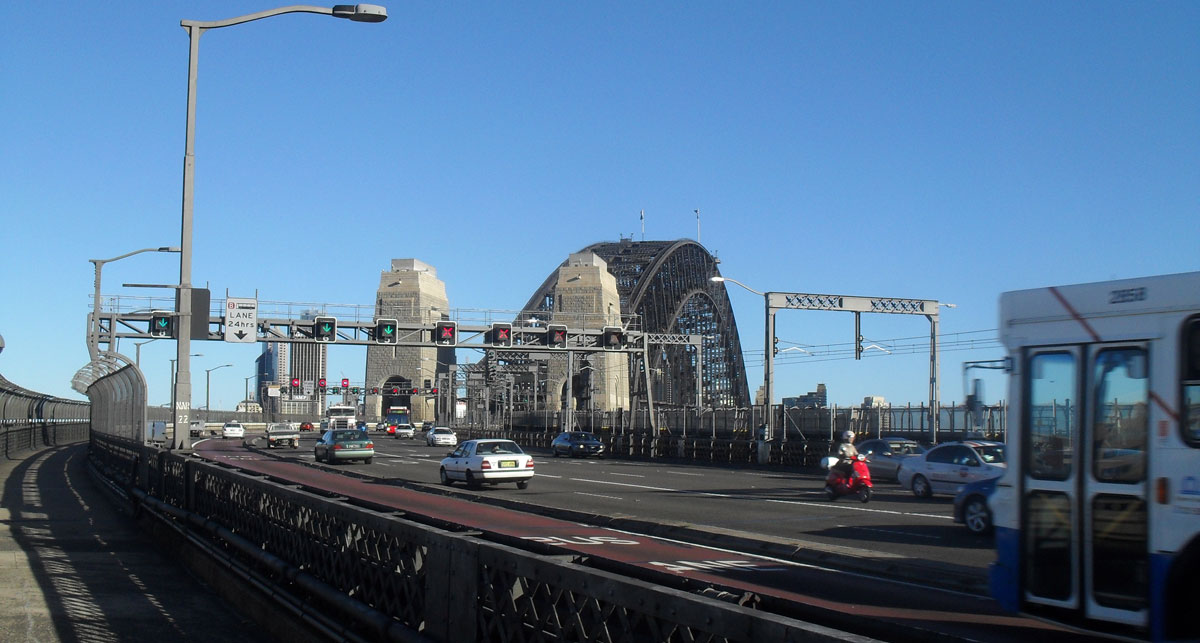 So after almost ten months I am now a working man again! I have started my job as an Online Content Editor for Amnesty International and all is going well and in some ways it is good to be back in a routine again.

I travel over the Harbour Bridge – EVERY DAY!

Essentially I am in a team of three that manage and update the Australia Amnesty International website – the work is interesting and the people are really friendly. Also having never worked in London, like a lot of my friends do at home, I am now beginning to experience the benefit of working in a big city – ie the ‘going out for after work drinks’ sessions!

Also I have had to stop and let what I am doing sink in a few times on my way to work each day. Basically I walk from my flat to the Sydney Harbour Bridge, which takes about ten minutes, then jump on a train which takes me across the Harbour Bridge and to work each morning (the journey is another ten minutes) – then I jump off at Redfern Station and walk five minutes to the offices.

Neutral Bay where I live is a nice spot too. It is on the North Shore of Sydney, so just north of the Opera House and Harbour Bridge, and five minutes walk away is Military Road which has a range of pubs, cafes, supermarkets, shops and an internet cafe.

What a waste of time

Taking up a lot of my time has been the World Cup, and unfortunately most matches are on at a pretty awkward time. This was illustrated with the first England game on 18 June. I worked a normal day and then when to meet my friend Pete and his friends (who I now know well enough to call my friends) in the CBD of Sydney (about ten minutes from where I work) to have some drinks. When then headed back to one of their homes to play a bit of FIFA and drink a bit more before returning into Sydney and the Star City Casino where we were going to watch England v Algeria.

The setting was great as the Casino has a huge (and I mean huge, like larger than a normal cinema screen) screen that they play the games on. We got there early enough to get a seat and then had a couple more beers. Only problems were:

As a result I got back home at 10am to go to bed absolutely shattered!

Not a waste of time

The day after that Pete, I and a few others headed to the ANZ Stadium to watch Australia play England at Rugby Union. Now I am not a huge rugby fan, but I have definitely got more into it since being in Australia and New Zealand.

We were lucky to see a great game that England won 21-20 – and gave them their first victory in Australia since 2003 and only their third ever (I had to check this online – I didn’t know it!). It was a fantastic atmosphere made all the more sweeter by the fact Matt Giteau – the Australian centre – missed a kick (right in front of us) that I seriously think I could have converted that would have given them the lead again with just a few minutes left. He was slap bang in the middle of the posts, but somehow dragged it wide!

And that really has been what I have been doing! Going to work, going out after work for drinks – we are right next door to a bit of a spit and sawdust pub called the Shannon, but it is good fun, and watching the World Cup. I also celebrated my 31st birthday for which my housemates cooked me a very tasty lasagne and have met up with other friends who I used to work with back home Tim and Ben. All in all I have settled in pretty quickly and things have worked out quite well.

The last England group game, the 1-0 win against Slovenia was on a slightly more acceptable time – midnight – so I also watched that although was a bit groggy for work the next day. Today (Saturday 26 June) I’ve wandered around the local area to get my bearings a bit more and am heading out to the city for a few drinks shortly and then tomorrow it is England v Germany in the World Cup second round…