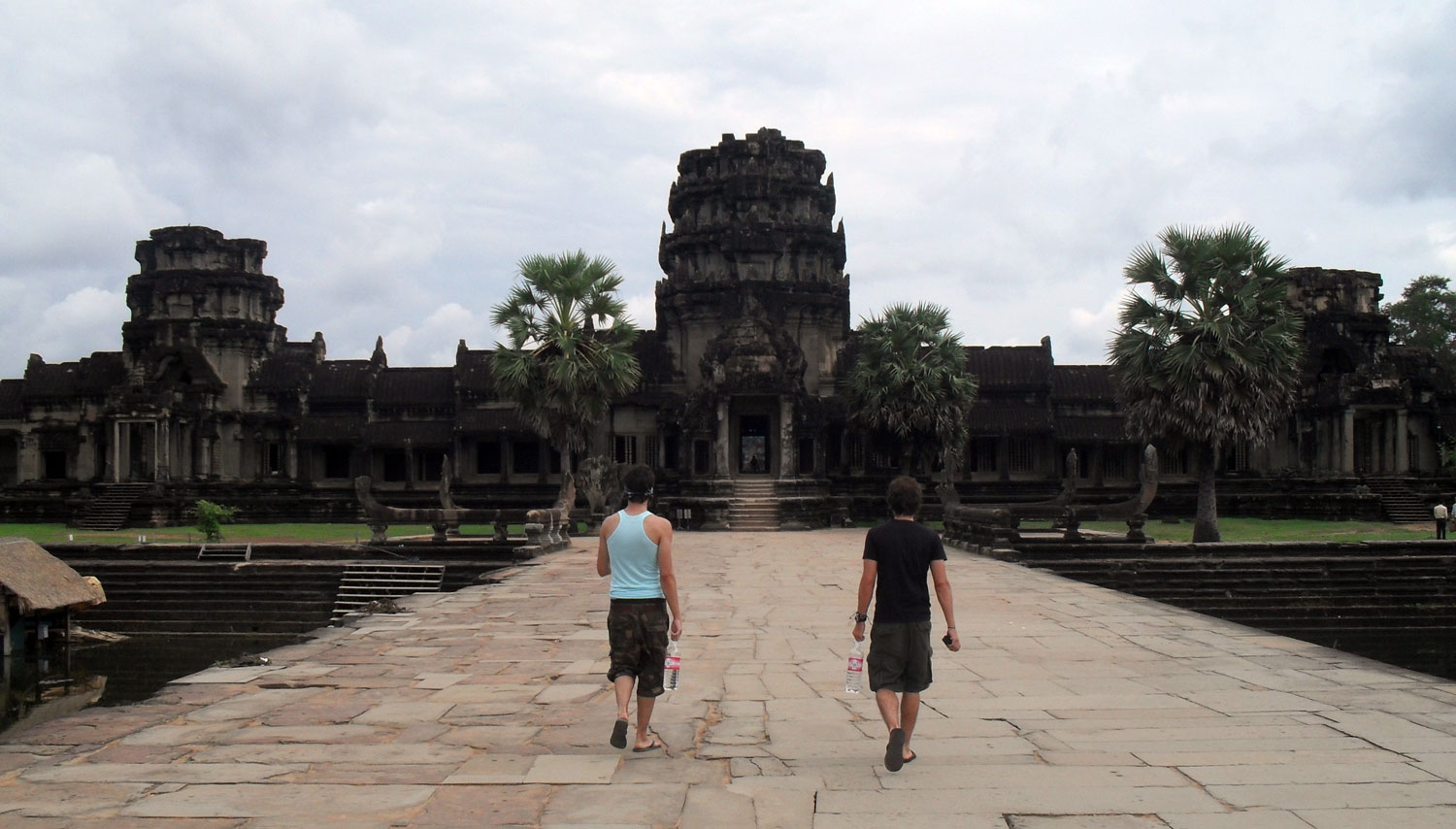 Whilst our journey from Phnom Penh to Siem Reap was relatively straightforward, two things became evident to me:

WHEN IS A SAUSAGE NOT A SAUSAGE?

We left Phnom Penh at 11.30am and our bus got us into Siem Reap for around 5.30pm. My first impressions of Siem Reap are that it is much cleaner and more vibrant than Phnom Penh. I think Siem Reap really benefits from being the stop off point for backpackers and travellers visiting Angkor Wat. There is lots going on, a good selection of places to stay and a good choice of places to eat as well.

After we arrived we got a tuk-tuk to the guesthouse we were staying in, to meet our old travel buddy Alywyn, and then head out to have a wander round the night markets and then to grab some food. I decided to sample the delights of the local cuisine and order a Khmer sausage.

Now I love sausages, they are one of my favourite foods but the Khmer sausage wasn’t quite what I was used to. Without a word of exaggeration I struggled to get the fork into it, it was rock solid, almost like trying to pierce the skin of a frozen sausage (it wasn’t it was very much cooked). I don’t know whether they aren’t meant to be like that and I just got unlucky, or if that is how they eat sausages in Cambodia, but I will be staying well clear of them in the future.

I got a good night sleep so I was ready for a day I had been looking forward to since I booked my round the world ticket all those months ago – a visit to the temples of Angkor Way. Angkor Wat is the largest religious monument in the world, measuring 400 acres and was built in the early 12th Century.

Even in my brief time in Cambodia I had learnt how proud Cambodians are of Angkor Wat and it lived up to the high expectations I had. The first thing I noticed was how busy it was, but the second thing that struck me was the sheer size – it really is huge, then there is the detail and grandeur of the temples – there are hundreds of metres of carvings depicting historical events and mythological stories.

We explored as much of it as we could and stayed until the 5.30pm closing time when we had to get a tuk-tuk home. It is hard to put into writing just how amazing Angkor Wat is – the workmanship, when tools and machines were limited, is quite incredible. My only regret is that we only spent the day there – I can see now why the three day passes are so popular as there is so much to see.

As we drove back the sun was setting and the sky was becoming filled with stars – it was another of those moments that hit home and made me realise I was traveling – I guess having now got to around the five week mark, it becomes more real that this is not just a holiday but a lifestyle almost!

SOMETHING FISHY GOING ON

The first thing everyone did when we got back from Angkor Wat was taking a shower as the heat was stifling. Then we headed back out to the market to grab some food (I made a point of avoiding the Khmer Sausage) and then on for another first – a fish massage!

The sign drew us in as it proudly proclaimed:

“You are ever seen and need to massage by man. Now we have a surprised fish is able to massage really exciting and better then man. Was called GARRA RUFA Dr. FISH”

Who couldn’t be drawn in by that? Yes we had no idea what it meant either. It finished by saying “LET is FUN & Experienced Together”

We couldn’t resist and we all sat down, cold Angkor beers in hand, around what was basically a small pond whilst hundreds of fish nibbled at the dead skin on our feet. Al and Mary, were obviously more ticklish than me, Paul and Ben as they couldn’t stop laughing! Nonetheless it was a great end to a great day… or it would have been if I hadn’t joined Paul and Al to carry on drinking!

It wasn’t the best idea as the bus for Bangkok left at 8am this morning and I didn’t get in until 3am. I should have followed Ben and Mary’s lead and headed back after dinner. I am now sat on the bus feeling tired and hungover (and probably still drunk) as we bid goodbye to Cambodia and head back to Thailand and Bangkok.