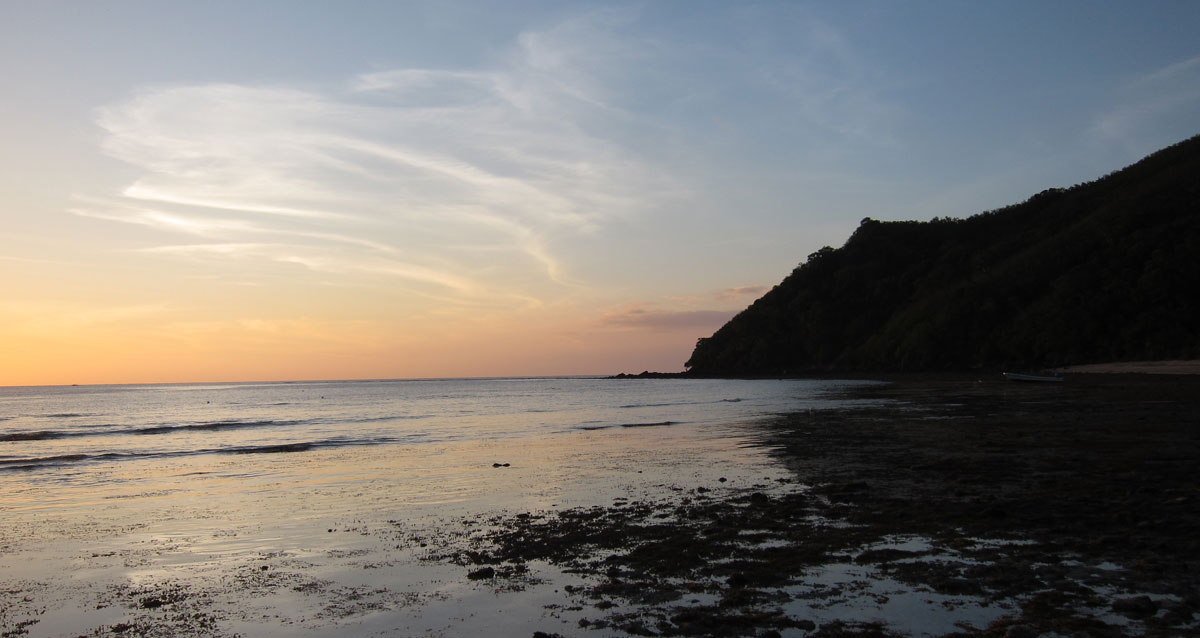 I feel genuinely sad writing this as my time in Fiji is just about to come to a close and it has been perfect in so many ways. I have been so lucky to spend over two weeks on the most idyllic, picture postcard, desert islands, completely relaxing with two fantastic people whilst meeting many others. In particular Faye and I got very close and it was very sad when I said goodbye to her earlier today.

Anyone at the end of my last blog we had managed to get back to Naviti and back to Botaira Beach Resort after two very disappointing days at Octopus Resort on Waya. We were welcomed back onto the island like old friends by staff and fellow guests – it was so nice.

So we settled into a familiar routine of lounging in hammocks, chatting, reading, drinking anad stargazing! On our first afternoon back we did our bit of activity with a game of volleyball against fellow guests and staff. Then our activity for the second afternoon was spear throwing which was great fun and made me feel like a real Neanderthal man (almost!).

After the spear throwing we had a coconut demonstration where one of the members of staff literally shimmed 20 foot up a coconut tree in his bare feet to bring some coconuts down. His agility was incredible! We were then shown how they weaved the leaves from the tree together to make a tray and we all had a go at it ourselves, rather unsuccessfully, before finally the tops were sliced off of the coconuts and we drank some of the coconut water which was delicious!

Friday 21 May was the last day of two great Australian couples we had met, so in the evening we all sat round and chatted with them and then the following day was our last full day on the island – we didn’t do too much, just took in the complete peace and quiet and relaxed even more!

We left Botaira on the 2.30pm boat on Sunday (23 May), just before that a load of travellers we had met in our brief stay at Octopus Resort turned up – they had obviously listened to us raving about Botaira! It was very sad saying goodbye to all the staff, I have never felt so at home anywhere – we had a lovely few days there.

We arrived back in Nadi to stay at Bluewater Lodge, where we had stayed before leaving for the Yasawa Islands. We went for a few drinks at Smugglers Cove across the road and then in the evening Faye and I walked along the beach before sitting in a hammock and talking about how we felt about each other. She is heading to Hawaii for a couple of weeks and then home whilst I will be travelling for longer obviously. Whatever happens I will be forever grateful that our paths crossed all those weeks ago on the way to Abel Tasman National Park in New Zealand – both her and her sister Lucy are great.

Yesterday we went into Nadi itself to have a wander around the town and go to some craft markets. The town itself doesn’t really offer much, I don’t think many travellers stay here long, it is probably just a stop off point on the way to the Mamanuca and Yasawa Islands. Nevertheless at least we can say we have seen it!

This morning I got up at 5.30am to say goodbye to Faye and Lucy as they had an early morning flight to the States. I was genuinely a very sad moment as I have grown very close to them both, especially Faye. We hugged and said we would see each other back in the UK and then they were gone and I was left feeling a little deflated.

The hard thing about being a backpacker is saying goodbye to all the good friends you make – it doesn’t get any easier and I have spent most of today moping around not doing much waiting for my flight.

So I am now in Nadi airport waiting to move on again, but this time there has been a change of plan! All will be revealed in my next blog…

4 thoughts on “All good things must come to an end”