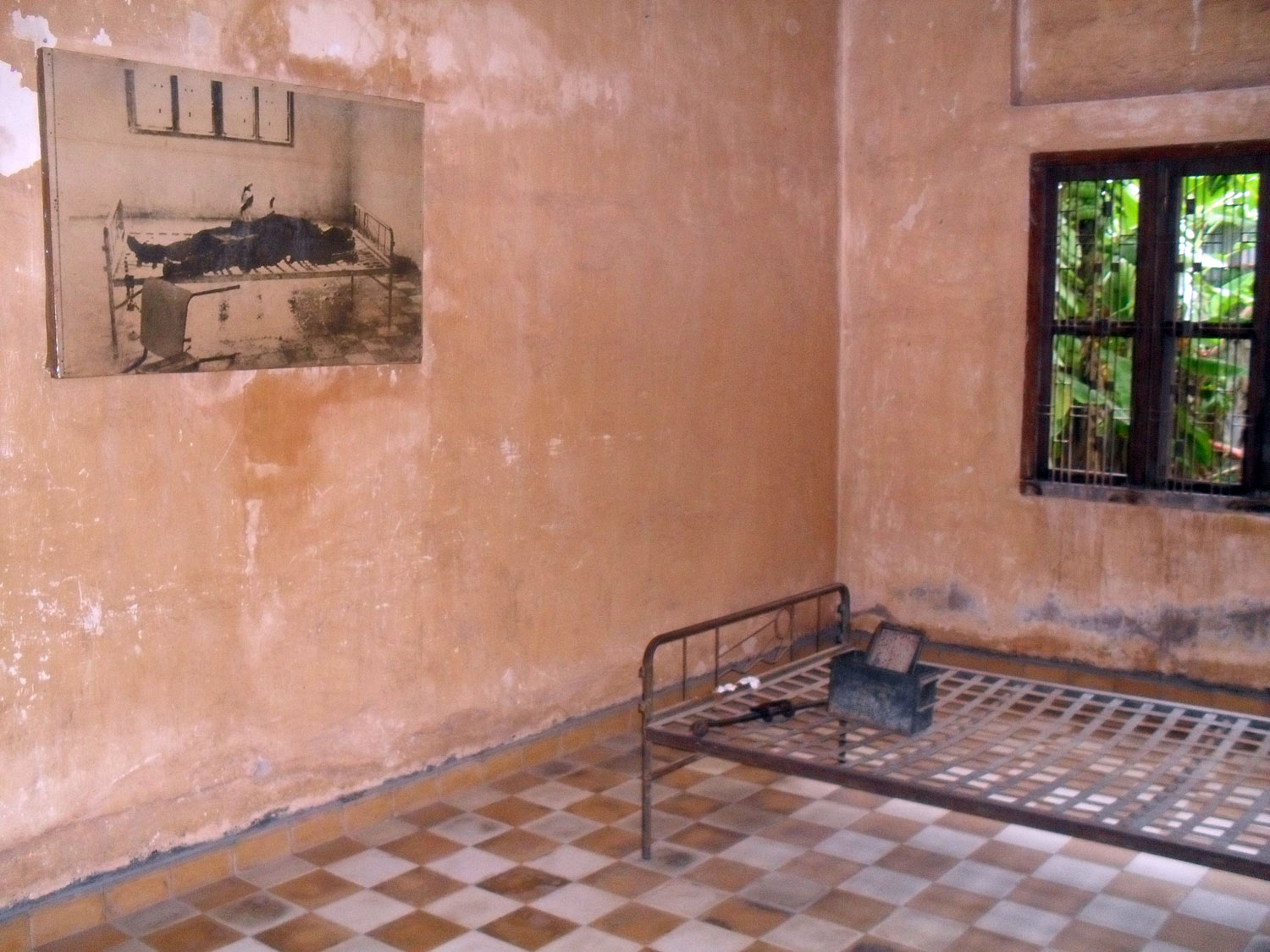 Having travelled through Thailand, Laos, Vietnam and now Cambodia I can safely say Cambodia has been the biggest eye opener.

After my time in Thailand, Laos and Vietnam I have become oblivious to the many street vendors offering you everything from women to hard drugs, but in Phnom Penh it is a bit different as practically every five minutes someone who is obviously a landmine victim, will shuffle up to your table and ask for money. Or alternatively eight-year-old children wander around trying to sell you books. We also saw possibly the most horrific and sad sight of the five weeks so far – a young boy, probably about 14 who had an absolutely huge cyst hanging from one side of his head, literally the same size as his head itself, being helped around on a stick begging for money.

We arrived in Phnom Penh, the Cambodian capital, at 4pm on Friday – our journey going relatively smoothly – certainly a better border crossing than the one that saw us take 27 hours to get from Laos to Vietnam. We found some half decent accommodation before the five of us (me, Ben, Mary, Paul and Al) trooped out for dinner.

At the place we had dinner we made friends with Linda, the Cambodian waitress who served us. She told us the average Cambodian wage was around 60 dollars a year and that she rented a room in a house which she shared with eight other girls. Six days a week she worked at the restaurant, from about 4pm to whenever it shut – usually midnight. She was also putting herself through college five days a week from 9am to 2pm to try and make a better life for herself. I don’t think I saw her stop smiling from the moment we went in. She was truly inspirational and humbling, and again made me appreciative for what I have.

After our meal me, Al and Paul headed off to a pub called Walkabout (not linked to the Oz theme chain you find in England) which was full of old men and young girls and then to a club called, rather ominously ‘Heart of Darkness’, which was actually quite a lot of fun.

Yesterday was one of the most eye opening and moving days of my life, we visited the Choeung Ek Killing Fields and the Tuol Sleng Genocide Museum. I don’t know whether to call these two places the highlights or lowlights of my trip so far – but I know for sure it was a day I will never forget.

The Killing Fields are a number of sites in Cambodia where more than a million people were killed and buried by the Khmer Rouge regime. Walking around Choeung Ek you know you are walking around a mass grave, there is a monument which is essentially a huge glass box containing hundreds of skulls, torn clothing and tiny fragments of bones are on the floor, the site starkly illustrates how brutal the Khmer Rouge were – ‘Killing tree against which executioners beat children’ says one sign, ‘Magic tree – the tree was used as a tool to hang a loudspeaker which make sound louder to avoid the moan of victims while they were being executed’ proclaims another.

Rather bizarrely you can also hire guns and fire in a shooting range supervised in the flimsiest sense by two Cambodian guards – lots of people were doing this but it had no appeal for me whatsoever.

It is difficult to put into words just how horrifying and upsetting what these poor people went through is. I am not going to even attempt to do so, but I will say that if you visit Cambodia you must come here.

From Choeung Ek we went to the Tuol Sleng Genocide Museum – if anything this was an even more sobering experience.

Tuol Sleng is a former high school which was used as a prison by the Khmer Rouge. Prisoners were subject to the most horrendous torture – some were drowned in tanks of water, some attached to IV pumps and blood gradually drained from their body to see how long they survived, electric shocks to the genitals were routine, they were forced to eat faeces and drink urine, forbidden to talk to each other, medical experiments on prisoners were common. Of 17,000 people imprisoned at Tuol Sleng only seven survived.

Everyone walked around the museum in total silence, trying to comprehend what had happened in this building. The ground floor classrooms in one part of the building have been left as they were when they were discovered in 1979. They are furnished only with steel bed frames with shackles at each end. On the walls are the grisly photos of the decomposing bodies chained to bed frames with pools of wet blood underneath.

Possibly the most heartbreaking part of the museum is where the photos of thousands of prisoners adorn the walls. They look hopelessly and helplessly out at you and as you look at them you realise that practically every single one of these people died a slow and painful death in this place – I can’t even imagine the pain and hurt they had experienced.

A few facts about what happened in Cambodia:

Accompanying us yesterday was Linda – the Cambodian waitress we had met in the restaurant the previous day. When we had told her what we were doing she had said she wanted to come with us – we told her she didn’t have to but she insisted. She talked to us about life in Cambodia and expected nothing in return, but later that evening we popped back into the restaurant where she worked and gave her some American dollars, which she very grudgingly accepted.

After we got back from Tuol Sleng Linda also showed us a local market a few minutes’ walk from the centre of Phnom Penh, it was crazily busy and I think we were the only non-Cambodians there. Everything was being sold from fruit and veg to clothes and shoes. It helped lift our spirits and I don’t think I have seen a happier collection of people than the Cambodians. Considering what they have been through and the fact they have practically nothing it is quite amazing and a lesson to us all.

As I write this I am sitting in our hotel in Phnom Penh waiting for our bus that will take us on the Siem Reap. I only spent two days in Phnom Penh, but they have had a bigger effect on me than any two days in my life probably.

The centre of Phnom Penh is actually very plush, with lots of posh hotels, bars, restaurants and houses seemingly springing up all over the place. However this is a dichotomy with what you see on the streets, where the poverty is all so apparent. Also, as we discovered yesterday when Linda showed us the local market, just two or three minutes’ walk from the centre of Phnom Penh and you are in much less salubrious surroundings – where again the poverty is apparent.

As for our new friend Linda – I guess this is an example of how someone you meet traveling can have a big impact on you in a short time – she was a remarkable lady and I hope that things turn out well for her.

4 thoughts on “A Heartbreaking Time In Phnom Penh”