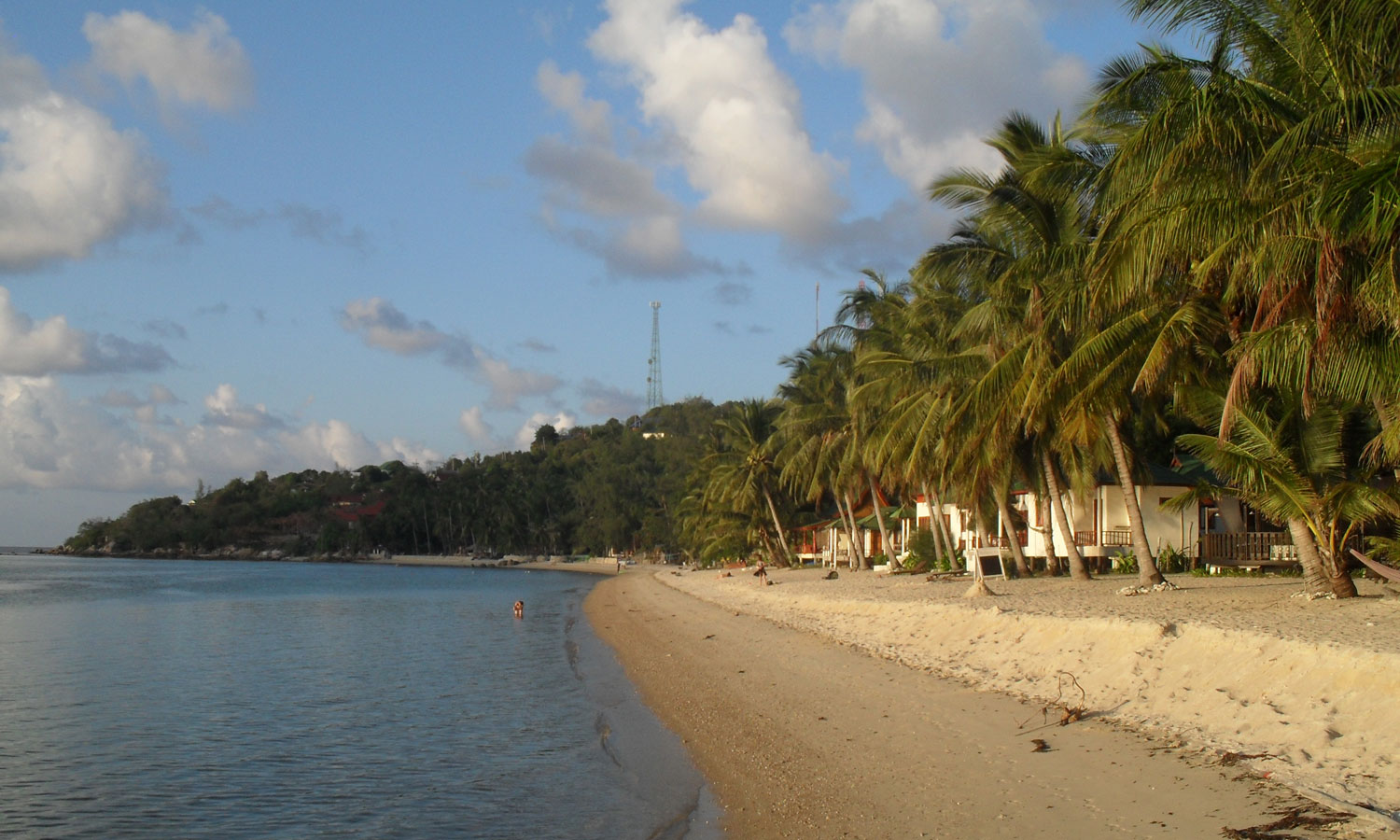 So that is another one crossed off of the bucket list – I’ve attended a Full Moon Party – something I had heard a lot about since I arrived in Thailand and it didn’t disappoint.

Me, Ben, Mary and Nikki left Ko Phi Phi on 29 October – got the 9am boat and arrived back at Phuket around midday. When we got to Phuket we met up with a friend of Ben’s whom Ben had met when he last went travelling six years ago.

We got a boat out to Banana Rock and then Banana Beach. Here I realised two things: 1) There were no bananas, 2) I am just about the only person I know of, of all of those I have met travelling, who has trouble snorkelling.

Everyone else seems to do it with ease and float around on the waters surface elegant observing the amazing marine life going on below them, I just flail around desperately trying to stop myself sinking. I really can’t get the hang of it and I don’t know why. I’ve never been particularly comfortable in water, but I can swim, I just cannot snorkle. So after a little while I got back in the boat and gave up.

When we went out for dinner that night I had another first. Phuket is a very busy place and we were slap bang in the middle of the Patong area, which is one of the most popular areas. Wandering down the street that night I saw a man taking his pet lizard for a walk on a lead! This was a big thing too – it looked about three foot long, but he was wandering down the main strip as if he was walking a dog. No one was really batting an eyelid – which is an indication of the weird and wonderful world of being a backpacker!

A FORK IN THE ROAD

We had one more night in Phuket and then it was time for Ben, Mary and I to go our separate ways. This was the first time we had gone on a separate route since we started traveling together (although I did arrive in Chiang Mai a day later than them at the start of our travels). They are heading to Langkawi in Malaysia and Nikki and I are heading Ko Pha Ngan for the Full Moon Party, although I will be meeting up with them again in a couple of weeks in Bali.

This gave me a chance to reflect a little though, as I guess this is what being a backpacker is all about – being flexible with your plans and meeting people. After six weeks away I feel so much more comfortable traveling now and booking accommodation or transport is not daunting, certainly not like it was when I arrived in Bangkok at the start of my travels.

WHO KNOWS A GOOD LAWYER?

So Nikki and I arrived in Ko Pha Ngan rather aptly on Halloween. The journey from Phuket was beset with a few hassles. The kind of things that if they happened to you at home in daily life on a journey you would get extremely annoyed, but when you are traveling and have all the time in the world you just let them wash over you.

Anyway after changing minibus three times and then getting the ferry we arrived in Ko Pha Ngan at 7pm. By which time it was dark and Nikki and I were pretty worn out, and with our guard down we let someone on the ferry talk us into booking into some accommodation he obviously had a link with. He showed us photos of it and, of course, it looked very nice.

However we should have been alarmed by the name – Ok Bungalows – I would have thought they could have come up with a more impressive name, something like Quite Nice Bungalows, or Cosy Bungalows or even Very Good Bungalows. Once we saw our room we understood why though, as I felt like suing under the Trades Descriptions Act – it was definitely not ok! Nikki and I walked up the coast and found a yoga retreat where we had dinner and then we got a moto-taxi to a part of Ko Pha Nhan a bit further up the coast to an area called Laem Song where we booked ourselves different accommodation for the following night.

Thankfully our new accommodation (Laem Song Bungalows) was much better, despite only costing me and Nikki £2 a night each. It was a good 20 minutes tuk-tuk away from the main port, which was really busy with backpackers, and right on the beach (I mean literally right on the beach – you step from it onto the beach). It was fairly basic, not much more than a bed and a cold shower and toilet but clean and cheap.

If any of you have not heard of a Full Moon Party, they are a big thing over here. For one week a month around 15,000 extra people cram onto Ko Pha Ngan and basically party until around lunchtime the next day. All kind of things go off on the beach, fire shows, whisky buckets, magic milkshakes… All the action centres around a string of bars in the Haad Rin area (around the port where ferries arrive).

The beach was absolutely thronging with people and there was a real party vibe. Different music was blaring out from every bar we went past, with all of them offering different (and enticing) drink offers. The beach was absolutely packed and everyone seemed to be having a great time (some, it was obvious, with the help of certain substances).

I spent a lot of the night talking to one of my new Swedish friends and drinking buckets. Much of the night after about 1am was a blur, but safe to say there was a great atmosphere amongst every backpacker on the beach and as far as I am aware no trouble. I eventually stuck it out until about 5.30am before somehow managing to get a tuk-tuk back. I fell to bed and was asleep almost instantly. I then slept the sleep of the dead until about 9am when Nikki arrived back!

THE MORNING AFTER THE NIGHT BEFORE

The next day (or later that day – Tuesday 3 November) was so strange as I got up about 1pm, pretty hungover and it was obvious everyone else was in the same state. Everywhere was very subdued and people were generally not moving much! I did very little and got an early night.

However there was a massive storm overnight – I woke in the middle of the night to the bungalow shaking and the sound of the wind absolutely raging. It was actually quite scary as, having not long come back from Ko Phi Phi which had felt the full effects of a tsunami a few years back, I did keep listening out for it all going silent, as that is cue for there being a tsunami. I didn’t want to wake Nikki as I thought it would be a bit unmanly if I appeared scared and besides she seemed to be sleeping through it all. Eventually I drifted off to sleep, but when I awoke the next morning Nikki told me she too had been awake and was lying there petrified!

When we ventured out of the bungalow yesterday morning there was A LOT of debris everywhere. My friend Jamie, who was also on the Island, got a ferry back to the mainland yesterday and said it was the single scariest journey he had ever been on. The sea was still extremely choppy and apparently the ferry was riding the waves like a rollercoaster. He said it got so bad the Thai ferry staff ran round giving everyone life jackets and telling them to put them on!

As it was I am heading off today (5 November) one day later and the sea seems calmer. I said goodbye to Nikki as she was staying on the Island for a few more days. To put things into perspective, her trip is almost at an end and she is living off £5 a day now – £2 for accommodation, £1 for breakfast, 50p for lunch and £1 for dinner and then the other 50p goes on a treat!

ON THE ROAD (SEA) AGAIN

I had a great time on Ko Pha Ngan. It is a touristy island – demonstrated by the fact that as we got a tuk-tuk from the main port to our accommodation for the majority of the stay – after about ten minutes of driving, when you’ve left the main strip, on the right you suddenly see a mock English pub, almost as if it has been dropped there straight from London!

I’d recommend that anyone who comes here does stay a bit further out as it is quieter and cheaper, and if you want to get a tuk tuk to the party area it costs next to nothing. It is undoubtedly very beautiful and it is worth visiting even if you aren’t intending to go to a Full Moon Party.

Am now waiting for my 11am ferry back to the mainland!

4 thoughts on “A Full Moon Rising in Ko Pha Ngan!”