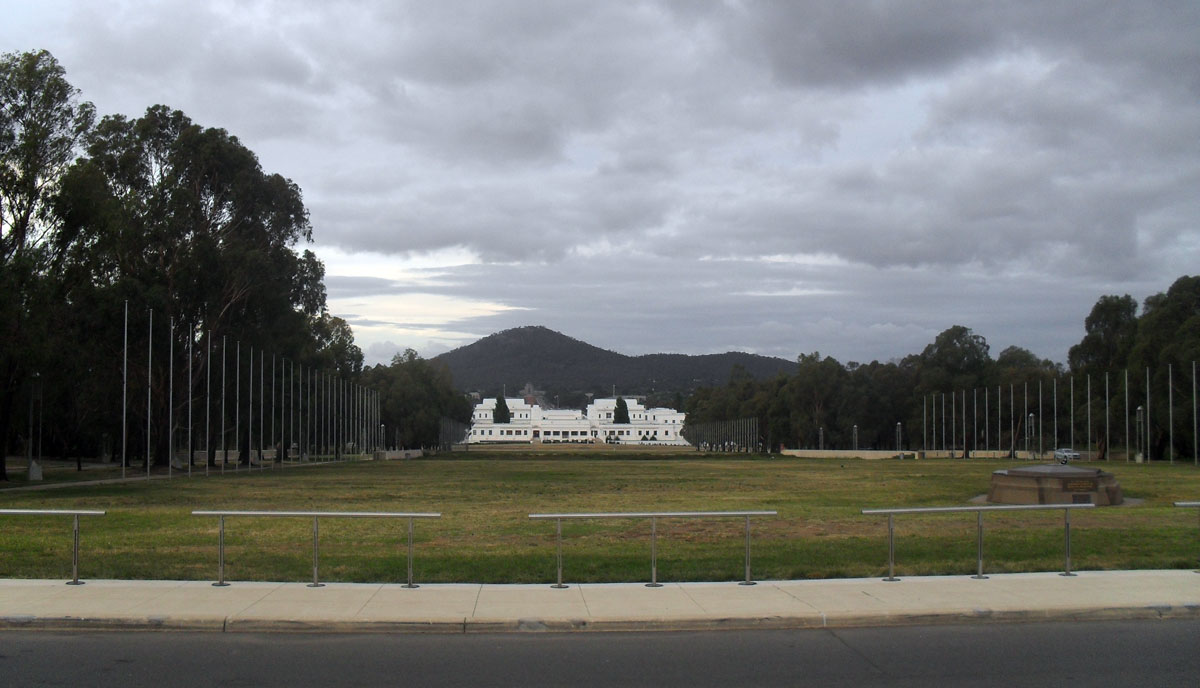 Our trip from Melbourne to Canberra was curtailed slightly. It took us so long to get out of Melbourne that we realised it was probably asking too much to drive the 650km to Canberra in one go.

We ended up breaking up the journey by stopping halfway in Albury. I guess such is the beauty of having our own car, we could decide where and when to stop, so when we arrived in Albury about 3pm, after five hours of driving, we decided on a whim to stop there. It proved to be a good decision.

AN IMPROMPTU STOP IN ALBURY

We stayed in another YHA – the Albury Motor Home YHA – this time purely by chance as we saw it was we drove through the town. It was a lucky spot as it was again really nice and incredibly quiet. In fact aside from a rather large Australian guy with an obsession with public transport, the only other person staying there was a lovely Australian girl called Maddy. What is more, it had a really nice pool, which was a great way to cool off after a long and hot drive.

In the evening Mary made a tasty curry and then Maddy joined Ben, Mary and I in drinking goon. Ben and Mary left about 11.30pm but Maddy and I continued knocking back the goon and talking (and watching the classic Australian TV series Matlock Police) until 4am! Maddy was only staying in the YHA for a couple of nights as she was moving to Albury from Tasmania for her work and was looking for places to live. It was one of those encounters that seems to happen far more frequently when you are traveling than when you are at home – that being you meet someone and hit it off with them instantly.

THE AUSTRALIAN INSTITUTE OF SPORT

The next morning we left Albury about 11am and Maddy had already left to go house-hunting, it was a brief encounter but a thoroughly enjoyable one. We stopped in a tiny village called Jugiong for some lunch and arrived in Canberra about 3.30pm. We stayed again in a YHA, which ticked all the usual boxes of being clean and having good facilities.

We had two main reasons for stopping in Canberra, well I guess three if you also include the fact that it is the capital of Australia! The main reason was to see the Australian Institute of Sport (AIS) – and we had a fascinating 90 minute guided tour around it.

As we found out the AIS was opened in 1981, and came about following the 1976 Olympics at Montreal when Australia failed to win a single gold medal, which was seen as a national embarrassment.

We got to see all of the facilities, which are hugely impressive, and included the indoor events stadium, gymnastics centre, volleyball centre, gym/fitness centre and the pool. There were quite a few athletes training at the time of our tour as well.

The AIS also has an interactive sports area where you can try various sports simulators and Ben, Mary and I had a fantastic time taking each other on in a penalty shootout, downhill skiing, skateboarding, the bobsleigh and more – it was great!

The second reason for visiting Canberra was to see some of the nearly 80 embassies and high commissions that are based in the City. So we drove good old Waggy around the streets taking in as many of the building as we can see and seeing how many countries we could name from the flags we saw. They ranged from the spectacular (China) to the awful (Venezuela).

Canberra is an interesting city in a strange kind of way – everything looks very much the same and there really doesn’t seem to be a lot going on – we saw hardly anyone really considering it is the capital. We did find out though that Canberra was selected as the capital in 1908 as a compromise between the rivals of Sydney and Melbourne and because it is midway between the two.

We only spent one night in Canberra and to be honest that was enough – not that it is a terrible place, just that there isn’t that much to do!

So on Wednesday (3 Feb) we left Canberra and arrived in Batemans Bay. Batemans Bay is further up the east coast and about 170 miles before Sydney. Apparently it is a popular holiday destination as it is the closest seaside town to Canberra. Anyone here at the moment on holiday won’t be very happy, as the weather has been terrible!

The day we arrived it was at least still dry, so Mary and I had a look around the town whilst Ben went surfing. The town itself is a pretty standard Australian town, but it is in a nice location on the water (as its name suggests) and with lots of beaches in easy reach. That evening we got back to the hostel and had some food and then drank some goon with an Australian guy called Henry we met.

Yesterday though was a totally washout – there was lots of rain, and I mean lots. I am staying in the hostel itself but Ben and Mary had decided to camp on the hostel camp ground and I felt very sorry for them with the rain hammering down! We were severely restricted in what we could do as it was raining so much, I managed to make it into town to use an internet cafe and then in the evening we had dinner, played Trivial Pursuit, watched Good Morning Vietnam and then went to bed. My only concern was that Ben and Mary would not be washed away in the rain!

AND BACK TO SYDNEY

Suffice to say they weren’t and today (5 February) we are heading from Bateman’s Bay back to Sydney, unfortunately as I write the rain is still torrential and shows no sign of letting up. I am glad we have our own car right now than having to be waiting for, and getting on and off of buses!

4 thoughts on “A Brief Encounter on the way to Canberra!”